Stojan Dimov got his primary and secondary music education in the music schools in Veles and Skopje and continued to graduate from the Faculties of music in Skopje in the class of prof. Ivan Kocharov, and in Zagreb in the class of prof. Josip Nohta. He earns his master’s degree from the Faculty of music in Skopje in 1993 and in the period 1980-1995 he is the principal solo clarinettist of the Macedonian philharmonic orchestra during which time he is also an active member of the Big Band of the Macedonian RTV. From 2002 he is a permanent member of Goran Bregovic’s band performing all over the world. He has extensively performed in recitals, as a soloist with orchestra under renowned conductors and has been a member of various chamber ensembles. Stojan Dimov is one of Macedonia’s most prominent musicians with an active career world-wide.

Dino Imeri (1990) is one of Macedonia’s finest pianists. He has performed with great success with the Strasbourg Philharmonic, the Sofia Philharmonic, Macedonian Philharmonic, the Symphonic and chamber orchestra of the Faculty of Music in Skopje, the Macedonian opera and ballet orchestra, the Chamber orchestra of Jeunesses Musicales Macedonia. In recital he has performed in renowned concert halls throughout Europe including “Vatroslav Lisinski” in Zagreb, the Esterhazi Palace and “Liszt Centrum” in Austria, and at “Piano Plage Festival” in France, Ohrid and Skopje Summer Festivals, Interfest-Bitola etc.

He is the winner of numerous prizes and accolades, has recorded several CDs for domestic and international publishers and from 2018 he is a docent at the Faculty of music in Skopje teaching piano as well as several other subjects such as chamber music, piano accompaniment, and piano in context. 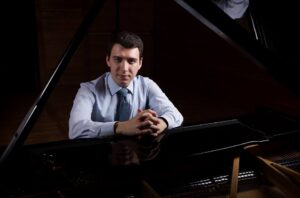