Founded in 1996 by laureates of the Conservatoire National Supérieur de Musique de Paris, the Diotima Quartet has gone on to become one of the world’s most in-demand ensembles. The name reflects the musical double identity of the group: the word Diotima is a reference to German Romantisism – Friedrich Hölderlin gave the name to the love of his life in his novel Hyperion – while it is also a nod to the music of our time, recalling Luigi Nono’s work Fragmente-Stille, an Diotima.

The Diotima Quartet is honoured to partner with several of today’s major composers, such as Helmut Lachenmann, Brian Ferneyhough and Toshio Hosokawa, while also regularly com­missioning new works from a broad range of composers, such as Tristan Murail, Alberto Posadas, Gérard Pesson, Rebecca Saunders and Pascal Dusapin. While being staunchly dedicated towards contemporary classical music, the quartet is not limited exclusively to this repertoire. In programming major classical works alongside today’s new music, their concerts offer a fresh look at works by the great composers, in particular Bartók, Debus­sy and Ravel, the late quartets of Schubert and Beethoven, composers from the Viennese School, and also Janácek.

The Diotima Quartet has performed widely on the international scene and at all of the major European festivals and concert series (such as at the Berlin Philharmonie; Berlin Konzerthaus; Reina Sofia, Madrid; Cité de la musique Paris; London’s Wigmore Hall and SouthBank Centre; the Vienna Konzerthaus, and so on). As well as touring regularly across the United States of America, Asia and South America, they are also artist-in-residence at Paris’s Théâtre des Bouffes du Nord from 2012 to 2016.
Their interpretations are regularly heralded by the international media, including in Germany (for their Concerto for Quartet and Orchestra by Schoenberg), in Spain, and not least in France, where their discography has been awarded five Diapasons d’or, of which two re­ceived the Diapasons d’or de l’année – for their recordings of works by Lachenmann/Nono in 2004 and works by American composers including Crumb, Reich and Barber, in 2011.

The critical and public success of the Diotima Quartet’s album of the Onslow Quartets which came out in 2009 on Naïve (including the Diapason d’or and Event of the Month in Diapa­son; Excepcional in Scherzo magazine) cemented the exclusive partnership between the ensemble and the record label, in a collaboration that has become long-term and hugely successful. In addition, upon the invitation of the Megadisc label, the quartet made a widely acclaimed recording of Pierre Boulez’s Livre pour quatuor révisé in 2015, which received ffff in Télérama and the Choc de l’année in Classica magazine.
In 2016, to celebrate 20 years since the quartet was formed, two recording events havebeen planned: firstly, a boxset dedicated to the Viennese School of Music, and secondly the release of a new series of contemporary composer portraits. The first in the collection is dedicated to the works of Miroslav Srnka, to be followed by those of Gérard Pesson, in collaboration with WDR Symphony Orchestra.

The Diotima Quartet is supported by the DRAC and the Région Centre-Val de Loire, and regularly receives assistance from the Institut Français, Spedidam, Musique Nouvelle en Li­berté, Fonds pour la Création musicale and from Adami, as well as from private sponsors. 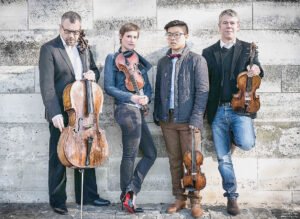