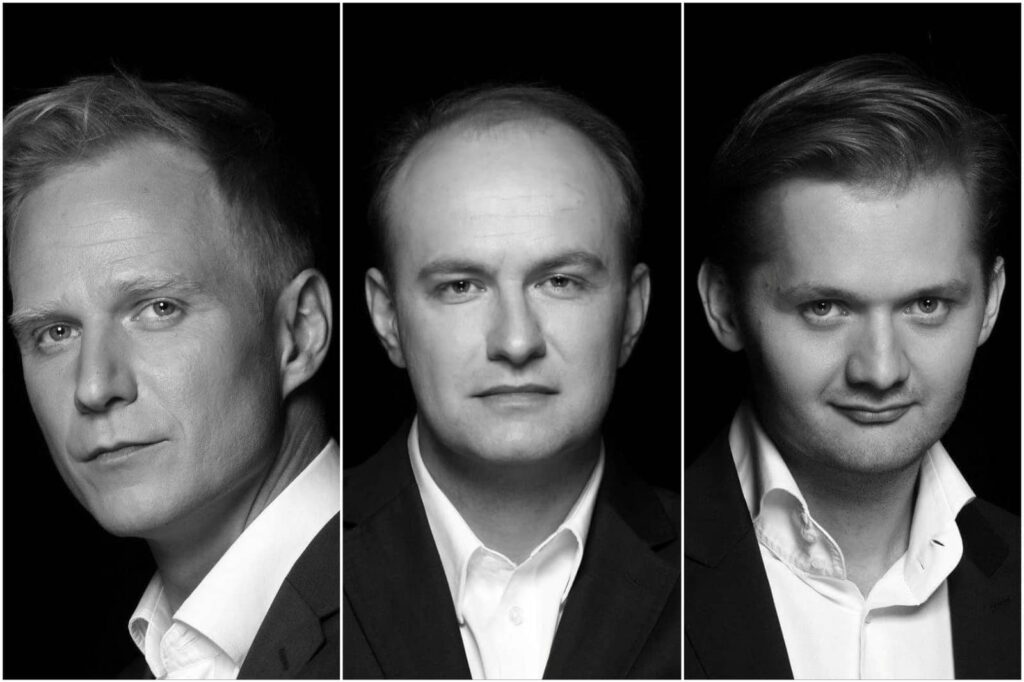 The Penderecki Piano Trio was enthusiastically created by three of the most dedicated and outstanding Polish musicians of our time. For many years, all three have been closely associated with the legendary composer Krzysztof Penderecki and his vast reputable work. The promisingly gifted pianist Konrad Skolarski, the breathtaking virtuoso Jarosław Nadrzycki, and the sensational cellist Karol Marianowski are all acclaimed artists in their country and abroad. They are laureates of many international music competitions, each with a long history of performances all over Europe, North and South America, as well as Asia.  As soloists or as chamber musicians (the two string musicians were recently at the core of the earlier Meccore String Quartet), each member of the Trio Penderecki has performed in  distinguished concert halls namely the Auditorio Nacional de Musica in Madrid, the famous Wigmore Hall, Cadogan Hall and Menuhin Hall in London,  the Musikverein in Vienna, the BOZAR in Brussels, the Frick Collection in New York, the unique Pollack Hall in Montreal, the Hall of the National Philharmonic in Warsaw, the Great Hall of the Conservatory in Moscow, the Aram Khachaturian Concert Hall in Yerevan, and the Atheneum in Bucharest.

The members of the Trio have won many prestigious international competitions, and have also received numerous awards for their previous recordings, including the Supersonic Award of the German magazine Pizzicato, five Diapasons d’Or of the French Magazine Diapason and several nominations for the Fryderyk award. The three Penderecki Trio musicians have also performed with leading orchestras such as the London Philharmonic Orchestra, the Royal Philharmonic Orchestra, the MDR Sinfonieorchester, and the Simón Bolivar Orchestra of Venezuela.

All three artists are Graduate Students of the Hochschule für Musik Köln, the Boston Conservatory, the Fryderyk Chopin University of Music in Warsaw, and the I. J. Paderewski Academy of Music in Poznań, where they currently conduct pedagogical activities. The Penderecki Piano Trio has the honor to carry and display the name of its Mentor, Krzysztof Penderecki, one of the greatest polish composers, a man whose contributions to Polish culture and to the history of 20th- and 21th centuries in music are overwhelmingly positive.