history of the festival

Short history of the festival

If we are to talk about Ohrid Summer Festival at the encounter of this year festival edition, it is certain that its existence of many years indicates to an awareness that the festival leans on something that indeed represents a great tradition. This tradition originates from the place which is given from God, from the city of Ohrid – the spiritual capital of North Macedonia, the antique city with its magically blue lake, a city with a cultural history marked with values of the ancient civilization, the city of the first Slavic university in Europe, the city of Samuil’s kingdom and finally –the city that represents the whole Macedonian cultural and spiritual history.

For these reasons, not accidentally in this city-holy place, God only had to send his noble message in order to mark the beginning of something that had to happen here. It happened on the remote year 1961 midsummer – on august 4th. A light sparkled under the amazing arches of the beautiful cathedral church St. Sophia – a part of the monumental and ancient values of Ohrid from the 11th century.
The glitter of that sparkle marked the birth of the manifestation which was probably destined by God, the same way as it was destined  that the opera singer Ana Lipsha Tofovic mark the beginning of a festival, that later will obtain the name Ohrid Summer.

That first concert on the 4th of August in St. Sophia, where the magical voice of the leader of the Macedonian opera was as sent for in that setting with amazing acoustics, definitely acknowledged the justification of all the strivings and wishes of that time to get to the thing which Ohrid had to have.
This act of concert christening of St. Sophia made in a moment of visionary illumination of Ana Lipsha Tofovic and her companion on piano Ladislav Perldic, with great enthusiasm supported by Ohrid citizens and Macedonian culture activists, showed that the seed is sown on a fertile soil and a manifestation of global importance is born.

Performing the works of Handel, Mozart, Beethoven, Gluck, worked impressively since the beginning and showed that St. Sophia is made for that. And so the story called Ohrid Summer began.

In the first years of the festival, in the concept of its program, the direct connection of St. Sophia with the vocal music prevailed. Nevertheless, on one side it was insisted that primarily the artistic quality is insured and from the other side the need for representing works inspired by the holy work of the Cyril and Methodius brothers, with which the importance of Ohrid as a cradle of the Slavic literacy would be emphasized. In the couple of years of self-discovery and outlining its own physiognomy, Ohrid Summer firmly established itself as one of the pivots of the Macedonian cultural tradition.

The cathedral St. Sophia, the old lady of the Ohrid patriarch, demonstrates itself as an irreplaceable location for chamber music; becoming more and more attractive for artists and assembles of all over the world. The Festival grew to be an eye – catching destination for renown artists, among them: Vladimir Ruzgak (Croatian baritone), Martina Arroyo (USA soprano), Slovenian octet, musicians of Prague, the famous quartet Julliard and especially Golden Gate quartet, Macedonian artists Milka Eftimova, Todor Skalovski…. Their performances provoked amazement, at the same time challenged other artists of the world who had the desire to see this miracle called St. Sophia. 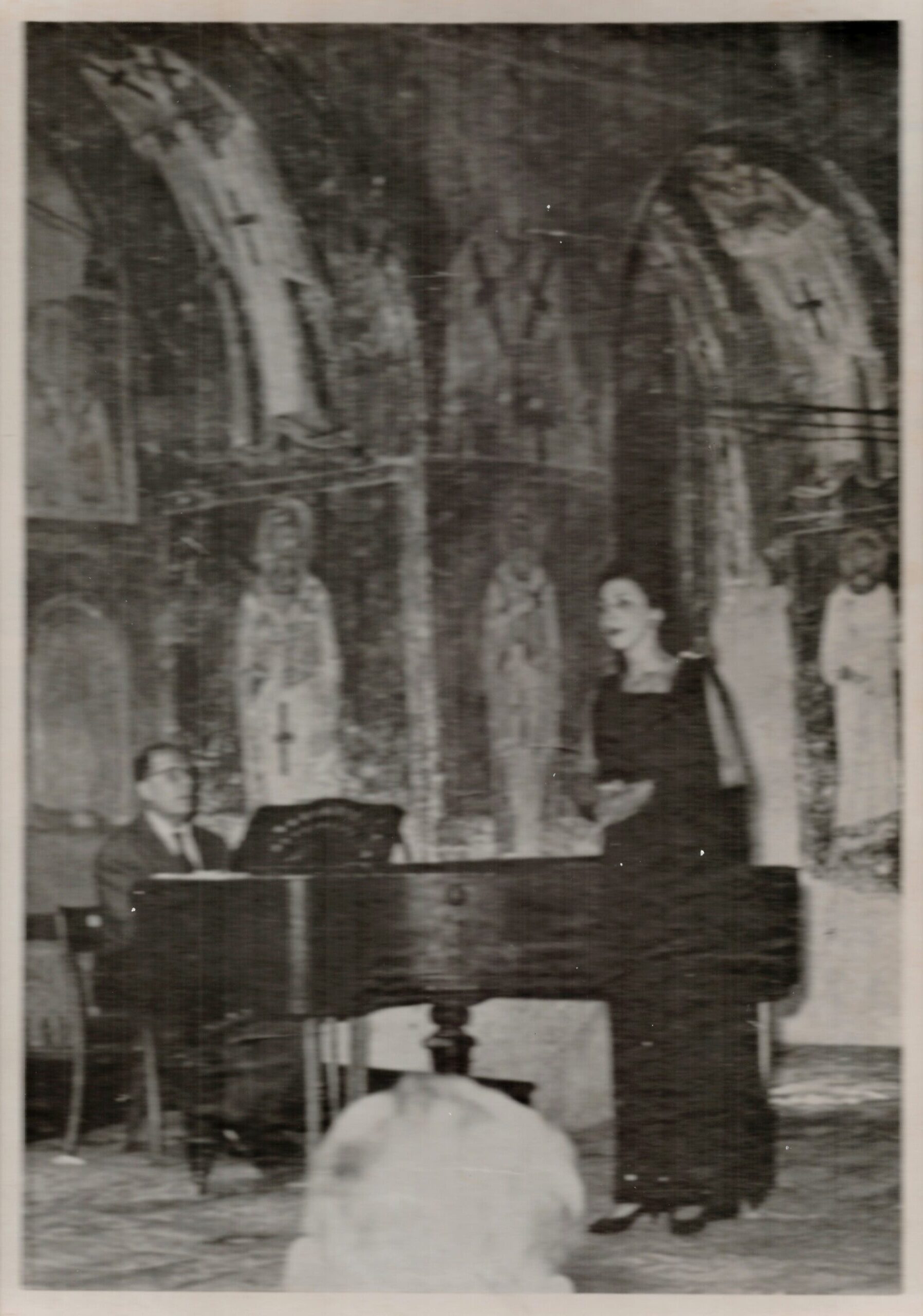 The years that followed marked perhaps the most significant period in the development of the Festival, a period which will be reflected on the upward course of this manifestation. It is the period of the legendary Leonid Kogan (Russian violinist, the best in the world in that time) and Andra Navara (cellist from France, as well one of the best musicians in the world). These two virtuosos belong in the group of artists who did not detach from the Festival up until their death. Their concerts, whether they were recitals or as soloists with orchestras, will be recorded among the most exquisite music events of the Festival which left a special mark in its history. They simply implanted their art and their creative spirit in the Festival. Their affection and attachment to the Festival was so great that with pleasure they engaged with pedagogical activity, carried some special music seminars within the outlines of the Festival, which showed to be as a very useful activity out of which a lot of young valuable musicians came out.

The Festival then was becoming more interesting, prosperous and more attractive for the artists of the world. In those years (70s and 80s) a lot of artists marched past, besides the local ones of former Yugoslavia, a lot of renowned names’ performance contributed for even greater affirmation of the Festival. The names like: Mstislav Rostopovich, Aldo Chikolini, Gidon Kremer, Rugero Richi, Viktor Tretyakov, Henrick Shering, Salvatore Arcado, Elena Obrascova, Katia Richarelli, Victoria de los Angeles, Maksim Vengerov, Vadim Repin, Julian Rahlin, Ivo Pogorelic and a lot of other vocal and instrumental soloists or assembles such as: Munich chamber orchestra, Virtuosi di Roma chamber orchestra, Georg Enesku chamber orchestra, the Lithuanian chamber orchestra, The Radio Symphony Orchestra of Austrian radio, Madrigal choir from Bucharest, Glinka from St. Petersburg, the children choir of Vienna and others; all had a say on the further growth of the Ohrid Summer.

In those years, as the physionomy of the music part of the program was strengthening, equivalent to that the need for the same thing on the other segment was felt – the theatre. Out of a simple reason the ancient atmosphere of Ohrid with its wonderful and impressionable scene locations attracts the attention of the directors’ eye and the magical performance of the actor. The local Macedonian theatre troops began to perform in the Festival with plays of their repertoire so that later on this segment of the festival program established enough to make the festival an inviting gathering place for many guest theatres from all over the world and especially the area of former Yugoslavia. There were a lot of theatrical performances by theatres of highest rank from countries of former Yugoslavia as well as from Russia, Turkey, France, USA, Holland, Italy, Greece and other countries. The beautiful and alluring scene locations in Ohrid offered new opportunities which were the first shows that were performed as a premiere on the Festival. Theatrical projects that will be remembered were performed on the scenes of St. Sophia, Dolni Saraj, the Samuils fortress, St. Naum, Saraiste, Plaosnik and other locations, adapted on texts of l the local drama authors or world classics such as: Shakespeare, Chekhov, Moliere, Gogol, Brecht, Nushik, or the antic: Sophocles, Euripides, Aristophanes and others. Completing the profile of the theatre program in the 80s the Festival reaches a real striking ascent which gives its right to be considered as a manifestation of global significance.

Its adulthood as a manifestation with high artistic values, Ohrid Summer confirms around the mid 90s, to be more precise in 1994 when it became a member of the European Festival Association with headquarters in Geneva. Strict and high criteria were set in order to get accepted in this essential association. Ohrid Summer fulfilled them and became a member of the family of European festivals. This is a very high acknowledgment for the festival and the Macedonian culture in general. Certainly with being a part of this association a lot of wide opportunities for working in more aspects of developing the Festival arouse, especially in the program section. On one side the Festival became more popular and on the other side a greater opportunity for collaboration with the elite European festivals was given. This would be of great use for the mutual exchange of projects and experiences.

When the years 2000 and 2001 come, the Festival gets something for which it long awaited. The Antique theatre is discovered as the greatest stage location. At that same venue in 2001, with the gala evening of the Festival (premiere of the spectacular drama project of I. Popovski – Macedoine), the greatest and the most attractive summer scene with around 3000 visitors was promoted.

With this venue, undoubted, the Festival takes another dimension in the direction of enriching its program contents, especially for the subject matter gala and opening evenings which require extravagancy. Since then all the gala evenings of the Festival are held on the scene of this magnificent venue. This was demonstrated by the unforgettable premiere project Macedoine, followed by the stars of the Russian Opera and ballet, the concert of the famous tenor Jose Carreras etc.

The Ohrid Summer Festival today can be said that is a really fortunate festival to have the city of Ohrid and the contrary- the city is blessed to have this festival and it was probably destined to be so.

In the Republic of Macedonia certainly the awareness of the meaning of this superb cultural manifestation always exists, because of what the festival has the absolute support of all the institution of the state. Especially the support of the government of RM through the Ministry of Culture, the President of the Republic who at the same time is the Patron of the Festival, as well as the important support of the economy through firms and companies that financially assist the festival.

Today, Ohrid Summer Festival presents a great dignity and an exceptional cultural gain for Ohrid and the Republic of North Macedonia; a manifestation with which Ohrid and North Macedonia can be represented with dignity in the world.

With this long tradition, on welcoming this year festival edition of the  Ohrid Summer realizes a universal noble mission of a competition of high artistic values with intentions of realizing the new visions with even higher aims in the European and global cultural space.

It is certain that in this year the 62th festival edition of Ohrid Summer, in its traditional term 12th July – 20th August, we will have another shining edition with all its peculiar characteristics that make the festival special, recognizable and unique in our area.