Kholodenko: It was a real pleasure to play before the audience of “Ohrid Summer”

Within the frames of the festival “Ohrid Summer”, Russian pianist Vadim Kholodenko, who has a reputation as one of the musically most dramatic and technically gifted performers of the new generation of pianists, performed last night.

The unstoppable and unique Kholodenko has established fluid with the public at the very beginning of the concert, while the attendees at the cathedral church “St. Sophia”, where he performed, were delighted with his exceptional artistic talent. 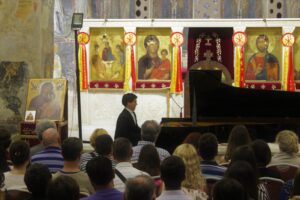 -I am very happy to have felt this connection. It was a real enjoyment to be played in front of such an audience and in such an object as the “Saint Sophia” church. I played Sonatas from Chopin and two nocturnes, and the second part of my solo concert was dedicated to the sonatas of Prokofiev. It’s exactly this program I play this season, says the young Russian pianist. 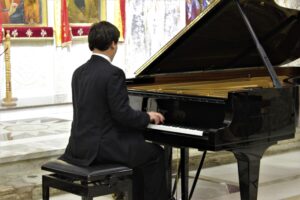 Classical music lovers, besides enjoying the late night concert, were impressed by his performance on “Ohrid Summer” the day before, when together with his colleague, violinist Alena Baeva made an unforgettable experience with sonate evening in the church “St. Sophia”. 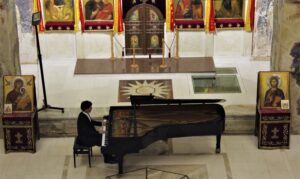 Vadim Kolodenko, although a young artist, is building his career in Europe, Asia and North America. Winner of the Golden Medal of the International Piano Competition “Van Cleoburn” in 2013. So far he has collaborated with a number of top conductors, orchestras and performers, including the well-known to us: Vadim Repin, Alena Baeva and Alexander Buzlov. Behind him there are more compact discs. 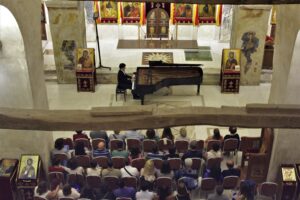