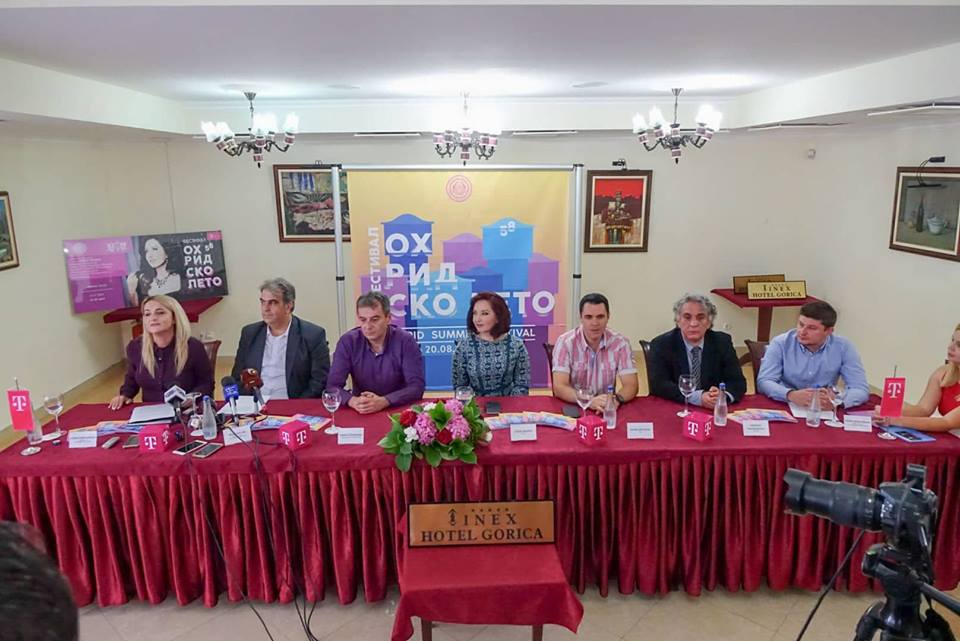 Mosuc: I am happy to be a part of the program of the “Ohrid Summer Festival”

The great world opera diva Elena Mosuc, one of the five best sopranos today at a press conference in the hotel “Inex Gorica” in Ohrid  together with her colleagues, the artists Kalin Bratescu and Nicolae Moldoveanu,  announced the concert for the opening ceremony of the festival “Ohrid summer” . The soprano Mosuc, modest in her claims about stay and performance in Ohrid, does not hide her satisfaction that she is  a part of an important cultural brand, the  “Ohrid Summer Festival” and that resides in, as she said, in a beautiful city like Ohrid.

– I’m for the first time in Macedonia. I did not hear much about the festival “Ohrid Summer”, but when I read it on the Internet, I saw that it is a festival with a great tradition with many famous world names. I also like your country very much. I am happy to be part of the Ohrid Summer Festival, said the opera diva Elena Mosuc, who before arriving in Macedonia, performed in a closing concert  of a Romanian festival, but there she  interpreted a program with more modern works, unlike the repertoire for the opening of the “Ohrid Summer”.

– We have chosen a repertoire of the most famous, most popular opera arias and we hope you will enjoy the wonderful evening where we will perform together with the  Macedonian Philharmonic Orchestra, added Mosuc. 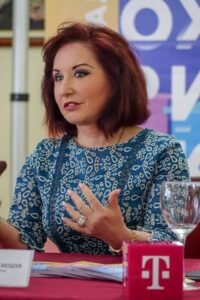 The romanian tenor Calin Bratescu, who is also for the first time in Macedonia, said he was honored to be invited to such a big and significant festival, as he said, in the beautiful city of Ohrid.

-We have been cooperating with Elena for a long time. We performed for the first time with the opera “Trubadur”. We promise you with a maestro Moldoveanu and the Macedonian Philharmonic Orchestra a wonderful concert, announced tenor Bratescu. 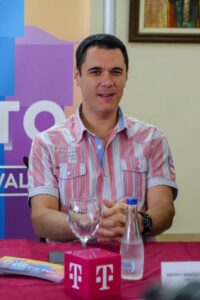 Nicolae Moldoveanu, under whose baton will perform  the opera artists  and the Macedonian Philharmonic Orchestra said that it is a great honor that together with his colleagues will contribute in the artistic way to the beauty of the Ohrid Summer Festival.

– We are honored that we are invited to this festival and we are happy that we will have the opportunity to contribute in an artistic way to the beauty of this festival. I already had the opportunity to cooperate with the Macedonian Philharmonic Orchestra.  I arrived yesterday and we already had one rehearsal. We will start the concert with one prelude, then we will continue with Italian opera works, as well as  with several French opeara arias . I would say that we will talk about a popular repertoire that is known to all, because such concerts of open type are not ordinary cultural events, but they also have their political significance because we are artists who are some kind of ambassadors of culture that we are trying in a certain way to help in the preservation of peace, said maestro Moldoveanu. 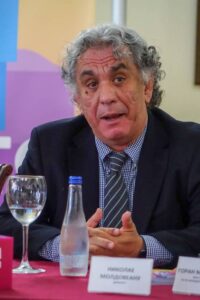 – This year we have the honor to open the festival. It is a pleasure to cooperate with artists of such caliber, with the outstanding conductor maestro Moldoveanu, with the opera diva Mosuc and tenor Bratescu. At the gala opening at the Antique Theater we are expect ing  a  great spectacle, said Muratovski. 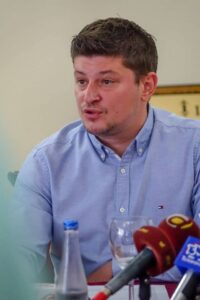 Vaso Ristov, the selector of the music program of Ohrid Summer Festival, expressed a great gratitude to the great artists who accepted to be the main participants in the spectacular opening of the biggest cultural manifestation in Macedonia.

-In my honor as a music selector at the opening ceremony of this year’s 58th edition of the Ohrid Summer Festival, we managed to bring three world artists, established, proven in their profession, presenting more and more on the European and world opera stages. Elena Mosuc, one of the best sopranos of today,  the brilliant tenor Calin Bratescu and the great conductor, maestro Nicolae Moldoveanu, underlined  the music  selector of “Ohrid Summer” Vaso Ristov. 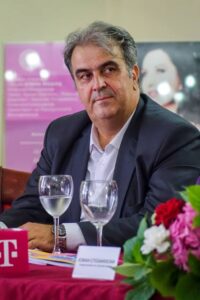 The Mayor of the Municipality of Ohrid, Jovan Stojanoski, welcomed the artists who will open the “Ohrid Summer” and announced that the municipality will continue to provide unreserved support  to the festival as a great Macedonian and European cultural brand.

-I wish all the artists who will attend Ohrid a warm welcome, to spend their time in our city, and to contribute to another successful festival edition of the Ohrid Summer Festival. As  a Local Self-Government we have always supported this festival, and this will continue furthermore because the NI “Ohrid Summer” is the most famous brand that represents and shapes Ohrid as a cultural destination in the world, said the Mayor of the Municipality of Ohrid  Jovan Stojanoski. 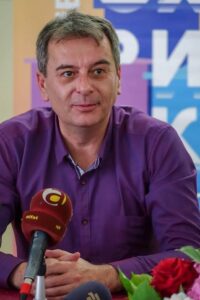 The most significant music and stage manifestation in Macedonia, “Ohrid Summer”, will traditionally begin on July 12th at the Antique Theater in Ohrid, starting at 9 pm. The big opera stars, the soprano Elena Mosuc and the tenor Calin Bratescu , under the baton of the maestro Nicolae Moldoveanu and accompanied by the Macedonian Philharmonic Orchestra will arrange an unforgettable experience for the visitors at the Antique Theater. As opened, the Festival will be proclaimed by the patron, the President of the State Dr. Gjorge Ivanov, and also will address the Minister of Culture of the Republic of Macedonia Asaf Ademi. The famous Macedonian actor Nikola Ristanovski will deliver the artistic message this year.

During the forty festival nights, “Ohrid Summer” will bring the perfect  blend of music, theater and art in general. There will be sound names from the world of music, but also the best theater productions with outstanding drama projects. There are  foreseen also three   exhibitions, art exibition,  photo exhibitions and contemporary jewelry. The festival and the city of Ohrid will host over 800 artists from 27 countries from Europe and the whole world.

As special experiences of the 58th festival edition, the concerts of the pianist Nikolai Luganski, the cellist Alexander Knyazev, the violinist Sergey Krylov, the pianist Aleksandar Madzar, the virtuoso of the oral accordion Antonio Serrano, the a capella – sextet “D’Quinn Six” from Great Britain, as well as several concerts that will be realized in cooperation with the embassies in Macedonia. The traditional Polish evening at the festival will bring a concert of the  “Wroclaw Baroque ensemble”, within the French evening will be the world-renowned pianist Michel Bourdoncle and his son Nicolas, and in collaboration with the Spanish Embassy in Skopje will perform  the soprano Eugenia Boix and the pianist Anna Ferrer .

The drama program starts one day after the opening ceremony, and will offer theater creations from domestic theatrical houses, as well as performances  of theaters from Serbia, Croatia and Slovenia.

Traditionally, within the frames of the “Ohrid Summer” will performe a number of domestic artists from the Macedonian Philharmonic, the Macedonian Opera and Ballet and the Music Youth of Macedonia.

According to the general manager Vrencovska, all the scenes and spaces where music and festival events will be held this year, are prepared and capable for artists, as well as for visitors who have them in large numbers every year, and as she announced, the next year it is foreseen  a construction of  mounting sstage auditorium that can be installed anywhere, which will allow events to take place in any appropriate place in the city.

The Ohrid Summer Festival has financial support from the Ministry of Culture of the Republic of Macedonia, supported by the Municipality of Ohrid, as well as by numerous  sponsors. 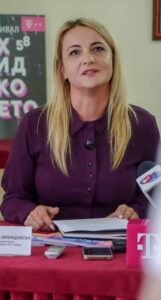 – At the moment when we announce an unforgettable festival edition, let me express my gratitude to the Ministry of Culture, without whose support the successful realization of the festival can not be imagined, to our general sponsor Makedonski Telekom, the other sponsors and supporters, friends of the festival, gratitude to the Local self-government, gratitude to  the  media that contribute to the “Ohrid Summer” to be our biggest brand,  a brand that is recognizable and highly valued not only in the country but also in the world , pointed out at the today’s press conference, the general manager of the Ohrid Summer Festival, Suzana Vrencovska.