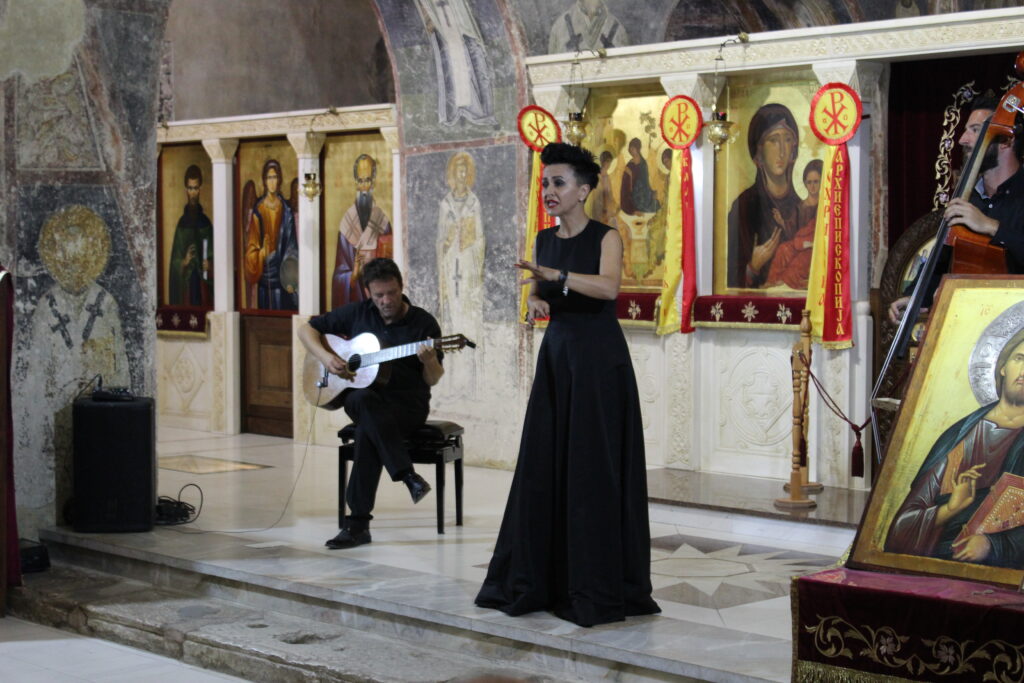 According to the fullness and enthusiasm of the audience last night, the central music temple of the festival “Ohrid Summer” – the cathedral church “St. Sophia” reached its zenith this summer with a concert of the famous Amira Trio (Amira Medunjanin, Zvonimir Sestak and Ante Gelo).

According to many, the best Bosnian, and not only Bosnian vocal, Amira Medunjanin sells the tickets one week ago, so that some additional chairs were added last night, and the gallery was full.

“The Bosnian Billy Holliday” (Garth Cartwright – the music journalist) sang, talked, conducted with the audience, who sang in a huge chorus, quietly, in front of her, under the vaults of the ancient church, for whose acoustics, Amira said ” in the world that would achieve such a thing. ”

The performances of the Bosnian Sevdalinka and the remakes of Macedonian folk songs sound incredible, without technique and sound system.

– In this ancient church, in this unrepeatable ambience, three years ago, the angels sang along with me. The concert was scheduled at the Church Square, and I prayed to the Most High to shut up. My plea was heard and filled, as my soul and tonight filled me, “Amira spoke to the audience, giving a sign when hundreds of her throats were to sing with her.
“Proshetala Jovanka Kumanovka “, “Jano Mori”, “Eleno kerko”, her version of “Ja izlezi Gjurgo”, are really Macedonian pearls that Amira Medunjanin has taken to show them their glow all over the world.
Right is Garth Cartwright, when she says that Amira “plays” with the Sevdah, finding a new context and form in the tradition of more than a hundred years old.

Several famous Bosnian pearls have heard the audience in new versions: “I do not give the young lad, the woman to sell for a handful of ducats and kilogram of gold” – Amira explains, which found different texts, different performances, such as the one of the Chicago Tamburitza Orchestra century.
Amira Medunjanin is a unique vocalist, one of the most active promoters of the musical heritage of Bosnia and Herzegovina, but also of the beloved Dalmatia (performed last night “Pjeva klapa”), and especially “Pri srce zarasnatata Makedonija.”

Her rich discography, published in collaboration with famous world record companies, is constantly receiving great criticism. The debut album “Rosa” was named the album of the year in the UK, while the album “Zuma” won the “Indexes” award.

In her music, besides the processing of the Bosnian musical folk tradition, there are also melodies from Serbian and Macedonian traditional songs.
She has won the prestigious “Best Female Vocal 2012” award by the Orange Foundation.

Zvonimir Šestak first enrolled at the State Conservatory in Carinthia, Austria, where he studied jazz contrabass. She continues her studies at the University of Music and Performing Arts in Graz, where she graduated in 2012. In 2014 she is also gaining her Masters degree. He has an active concert activity, constantly cooperating with popular musical names and ensembles from around the world.