The renowned opera diva Elena Mosuc, one of the best opera singers in the world, will open the 58th edition of the Ohrid Summer Festival on 12 July at the Antique Theater in Ohrid.

The performance of the soprano Mosuc, together with the famous tenor Calin Bratescu and the Macedonian Philharmonic Orchestra will provide for the audience an unforgettable experience and the concert will be reckoned among the history of the Ohrid Summer Festival.

-The Romanian soprano Elena Mosuc is one of the brightest stars on the world opera stage, and her performances are constantly followed with admiration both from the audience and the critics. Elena Mosuc has performed on the stages of leading opera houses numerous times, and this year she joins the Opera Magnates who have already performed on the Antique Theatre- Leo Nucci, Barbara Frittoli, Elina Garanca, Dmitri Hvorostovsky, Jessye Norman, Jose Carreras- said the Minister of Culture at the press conference today, where the program of the festival was introduced.

Alagjozovski added that this year, the program of the Ohrid Summer Festival covers the best Macedonian artists and orchestras.

He emphasized that the Ohrid Summer Festival is a brand of the Macedonian culture and is one of the main pillars of Macedonia’s international reputation regarding art and culture, and because of that the Festival deserves maximum support. 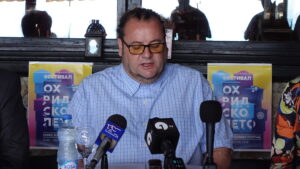 – The Ministry of Culture, this year has allocated 1.4 million denars for the stage of Dolni Saraj, which in a short time will be modernized according to world standards. The stage itself and the audience benches, which have been damaged over time, will soon be modernized. This is a huge project, but considering that the Ohrid Summer Festival is our ambassador in the world, it surely  deserves the best, and we undoubtedly give our maximum support. The realization of this project will enable the top artists to finally get the treatment they deserve, and with that we will aid the festival to climb a step further in terms of quality, said the Minister, emphasizing that the protection of the Ohrid region, the cultural heritage and the cultural tourism will remain top priorities for the Government and the Ministry of Culture, and that they will continue with their serious and diligent work in coordination with UNESCO.

The general manager of Ohrid Summer Festival, Suzana Vrencovska announced that this year the festival will be a symbol of unprecedented artistic experience and, as she added, the fifty events of this festival edition will be enhanced by the magic of numerous world renowned music voices and the great creative spirit of the leading theater performances. 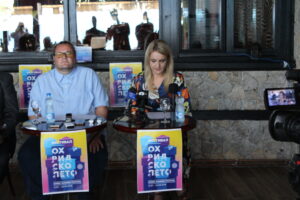 – With the professionalism and the skills of the new selectors, Professor Vaso Ristov and the director Aleksandar Popovski, both of them prominent artists and cultural workers well known to the domestic and international music and theater public, both of them with a rich international and professional career behind them, we have introduced a freshness in the program, and we have kept the quality which have been a trademark of the festival for more than half a century. Thanks to the dedication and the efforts of the team of Ohrid Summer Festival, we have successfully and timely completed all the preparations which make us a worthy host for more than 800 artists and many art lovers from all around the world. On the various festival stages, from 12 July to 20 August, Ohrid Summer Festival will offer numerous musical, drama, ballet performances, exhibitions, and events for the youngest, who, as part of the society, build the future of our country. The stage of the Ohrid Summer Festival will especially welcome them, and with that we will plant the notion of art in the depths of the children’s soul, as well as a respect for the high artistic standards, said the general manager Vrencovska.

According to her, the most important thing is to build the brand of the institution, to respect the festival tradition, but in the same time to introduce innovations that will refresh the program.

– I assure you that the novelties that we introduce in this festival edition will continue the path of the successful tradition, but will also present us with a new, modern dimension that will complement the rich festival history. In this direction, the visual identity for the 58th edition of the Festival, which will be used for the promotional material, carries the main message -the City (Ohrid) with its specific architecture presented as a scene for cultural events. On the design solution developed by the marketing agency “New Moment”, the specific architectures in Ohrid are presented in a modern color code in order to bring modern trends closer to the tradition. This year, the festival will use the latest technological and IT achievements through live broadcasts on some of the events from the artistic program- Said Vrencovska at today’s press conference, and thanked the state institutions and certain companies that continuously and selflessly aid the Ohrid Summer Festival.

According to the music selector of the Ohrid Summer Festival-Vaso Ristov, the festival together with the exclusive artists who will be part of this edition, Ohrid will become a true cultural metropolis and will attract numerous visitors from all over the world.

– The renown names that show up in this year’s program, soloists, ensembles, chamber and symphony orchestras, present a sufficient confirmation that the program will justify the expectations of music lovers this year. We believe that the performances of the great world artists will be a real artistic experience for the audience and will contribute to enhancing the festival history in the Republic of Macedonia and beyond, said the music selector Ristov. 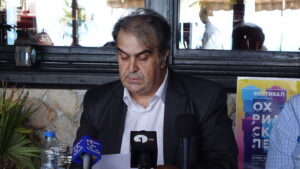 This year the festival audience will be able to see and hear the masterful pianist- Nikolay Luganski, the marvelous pianist Aleksandar Madjar, one of the best mouth organist- Antonio Serrano, the Baroque Ensemble Wroclawski from Poland, world leading pianist Michel Bourdoncle and his son Nicolas Bourdoncle. Music lovers will also be able to enjoy the music of the Spanish soprano Eugenia Boix performing together with the pianist Anna Ferrer, and the traditional event -Evening of the European Union will be enriched by one of the greatest Austrian artists, the pianist Robert Lerbaumer. The program this year will enable the audience to hear the Ukrainian Chamber Orchestra, as well as the Chinese Bamboo Flute Orchestra. Traditionally, Macedonian artists have their own place in the program, and for the annual birthday of the Ohrid Summer Festival we announce the concert of the famous Macedonian group- Synthesis.

According to the selector Ristov, a special place in the program takes Dimitrie Buzarovski’s work – Radomir’s Psalms, together with the orchestra, the soloists and the choir at the Macedonian Opera and Ballet under the baton of Bisera Chadlovska.

The festival’s fire will be put out on August 20th at the same place as the official opening – at the Antique Theater with the performance of the theatre play Iliad by Homer, directed by Jernej Lorenci. It is in fact a co-production project between the Slovenian National Theater CIS Drama Ljubljana, Cankariev House and City Theater.

– It is a great honor for me to be a drama selector of the Ohrid Summer Festival, and I accepted the task with great excitement, because a greater period of my work and my time in the theater  was spent on various festivals, and I will do my best to pass on the best in the form of experience, and in the form of a quality program. Indeed it was a very short time for all this to be done, but I think that this year we build the basis for everything that follows, said the drama selector of the Ohrid Summer Festival, Aleksandar Popovski. 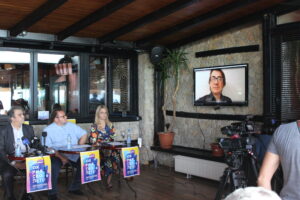 The drama program offers several theatrical performances, mostly performed by the domestic theatre houses, as well as theatres from Serbia, Croatia, Slovenia. Some of the performances are: “The Little Wire Girl” directed by Marjan Necak, a co-production project between the CIS Drama-Ljubljana and Moving Music Theater- Bitola, the premier of the play “The Misanthrope” performed the Comedy Theatre from Skopje, directed by Ana Vukotić, and the play “Danton’s Death”, directed by Dino Mustafic, performed by the Albanian Theater-Skopje and others. 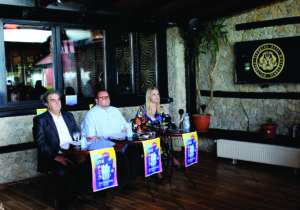 Ohrid Summer Festival as part of the European Festival Association, held under the patronage of the President of the Republic of Macedonia, and financially supported by the Ministry of Culture, continues with the successful stories in order to mantain its epithet of a highly renowned European festival.