The Romanian double bassist Petru Iuga is one of the most successful classical musicians of his generation. During his musical training in his homeland, the 20-year-old student came to the attention of Yehudi Menuhin and Alberto Lysy, who enlisted him for the IMMA (International Menuhin Music Academy) in Gstaad (Switzerland). After continuing his studies at the Hochschule der Künste in Bern and the Conservatoire National Supérieur de Musique de Paris, he became a member of the Ensemble Orchestral de Paris (Orchestre de Chambre de Paris) and first double bass with the Munich Chamber Orchestra. Petru Iuga has won numerous prizes at renowned double bass competitions and has been pursuing a worldwide concert career and makes guest appearances as a soloist with leading European orchestras, including the London Symphony Orchestra. Petru Iuga is professor for double bass at the Staatliche Musikhochschule und Darstellende Kunst in Mannheim and also teaches part-time at the Haut Ecole de Musique de Lausanne, Switzerland. In recent years he has given master classes in Russia, Italy, Portugal, Israel, Japan, Uruguay, China and Canada. He has recorded several CDs as a chamber musician, and he regularly gives concerts with famous fellow musicians. His invention, Ergo Bass, a knee support for double bassists that facilitates an ergonomic and healthier playing position, is used world-wide by many musicians.

Pianist Horia Mihail made his debut with orchestra in his native city of Brasov at the age of only ten. Since then, he has performed as a soloist with the great majority of Romania’s symphonic orchestras, including the George Enescu Philharmonic and the National Radio Orchestra. After studying in Romania with Constantin Ionescu-Vovu at the Music Academy in Bucharest, Mihail studied for three years at the University of Illinois, where he took courses with Ian Hobson, obtaining a Master of Arts Degree in 1995. In 1999, he was awarded the Artist Diploma Degree at Boston University, where he studied with Anthony di Bonaventura. Horia Mihail is also a graduate of the Andrei Saguna College of Mathematics and Physics in Brasov. He is a winner of numerous competitions received full scholarships at all the institutes of higher education where he has studied.  Horia Mihail has given concerts and solo and chamber music recitals in 24 countries on four continents. His performances have also been broadcast on radio and television in Romania, Belgium, Britain, Denmark, Hungary, the United States and the Voice of America. After lecturing for three years at Boston University, Horia Mihail returned to his native Brasov in 2002 as the soloist of the city’s Philharmonic Orchestra and a member of the famous Romanian Piano Trio. In 2009 he was appointed concert soloist of the National Radio Orchestra and is currently Artistic Director of Brasov Philharmonic, advisor on cultural matters to the mayor of Brasov and General Director of TAMTAM Festival. 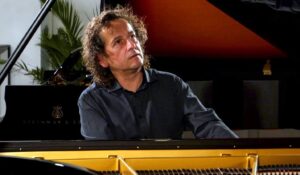