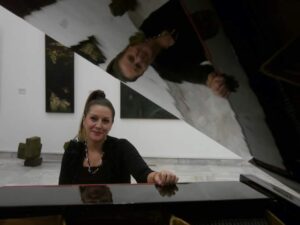 Macedonian pianists Ana Gaceva and Tatijana Dzorleva started performing together in 2005, when they helt their first solo recital at the Skopje Summer Festival. Since then, they have continuously realized numerous successful concerts throughout the country. The performing of these two pianists (professors at the Music Academy in Skopje and Shtip) is always highly evaluated by music criticism everywhere. The repertoire of the duo includes compositions from all musical styles and eras, including works by Macedonian and world contemporary composers. As a soloist Ana Gaceva stands out as one of the most active and successful in her country. The critics describes her as an artist with mature artism and individuality, technical virtuosity and unique expressiveness. She has won several national and international awards. Tatijana Dzorleva is also a soloist who has performed numerous concerts, both in her country and on the European stage. Her collaborations with Macedonian composers (Dimitrije Buzharovski, Goce Kolarovski, Tomislav Zografski, Stefan Gajdov, Damjan Temkov) resulted in constant promotion of Macedonian music in the country and abroad. She has won numerous awards and recognitions.