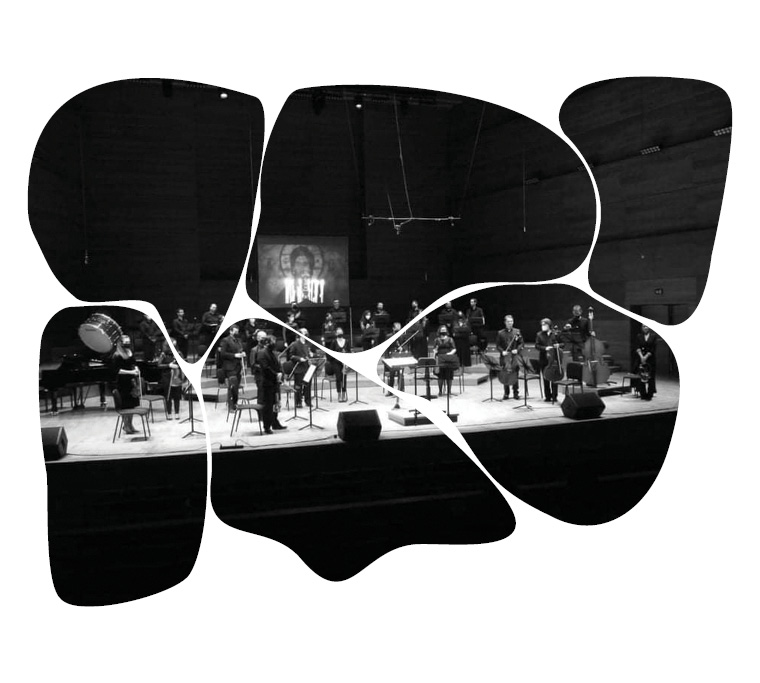 The chamber ensemble “Profundis” is a “young” formation that was established three years ago and aims at promoting a specific performing quality with an accent on the originality of their performances. Its members are some of Macedonia’s finest instrumentalists that are employed by the two professional orchestras in the country- the National Philharmonic and orchestra of the Opera. In addition to the classic repertoire, “Profundis” is dedicated to new contemporary ways of presenting music including digital concerts and use of new technologies. The quality of the orchestra is represented through its repertoire versatility and led by conductor and artistic director Gjurgica Dashikj it is a true representation of an ensemble of the 21st century. “Profundis” has successfully appeared at the “Autumnal music festivities” and “Days of Macedonian Music” festivals as well as the “Golden lyre” festival. They have collaborated with renowned Macedonian musicians such as Ljubisha Kirovski, Marija Gjoshevska, Blagoj Nacoski, Slavica Micovska, Nade Talevska, Marija Janchulevska, Stojanche Kosovski as well as with the concert masters of the Macedonian philharmonic Anna Kondratenko and Vladimir Kostov. The ensemble has performed with of Serbia’s best violinist Jovan Bogosavljevic in concerts in Skopje and in Serbia.  “Profundis” is especially proud of the concert that was supported by the Estonian embassy in Macedonia and was dedicated to the works of Arvo Pärt, one of the most significant composers of our time. They have performed in Italy, on a mini tour in Sorento and Perrugia with the Italian pianist Maurizio Mastrini, guitarist Daniele Aielo and conductor Paulo Shibiglia.

Gjurgica Dashic is a graduate of the Faculty of music in Skopje at the department of orchestral conducting in the class of prof. Sasha Nikolovski-Gjumar. Since 2008 she holds the post of choir master at the Macedonian opera and ballet and during this time he has contributed to the staging  prmiere and ongoing repertoire performances of the Opera. She has assisted numerous guest conductors including Emil Tabakov, Gianluca Martinenghi,  Enrico Dovico, Sasha Nikolovski-Gjumar, Vanja Niikolovski-Gjumar, Urosh Lajovic and  many more. As an orchestral conductor of the opera she has led the productions of “Rita” by G. Donizetti, “Il Barbiere di Siviglia” by Rossini and the concert dedicated to the young opera singers “Kosta Trpkov “. She was part of the production team of the first Macedonian musical “Tajno moja” for the life of Toshe Proeski.  In 2018 Gjurgica Dashic founds the chamber orchestra “Profundis” and is the orchestra artistic leader and conductor.

Born in Novosibirsk (Russia), Anna Kondratenko studies at the Special music school with O. Marchenko and A. Gvozdev, continuing to earn her graduate diploma and master’s degree the University for music and dance in Cologne in the class of V. Tretyakov. She has been a soloist and concert master of the Youth symphonic orchestra and the Philharmonic in Novosibirsk, the Klassische Filharmonie Bonn, “Philharmonic of the Nations” and other orchestras in Russia, Ukraine, Hungary, Germany, Spain, France, Brazil, America, Malaysia, China, Lebanon and Japan. She has taken part in many masterclasses (Z. Bron, D. Zigmondi) and has participated in many festival academies including the “Mozarteum” in Salzburg, Holzhausen Music days in Germany, all significant festival in Macedonia etc. Anna Kondratenko is a prize winner of numerous competitions in Russia and Europe including the “Mravinsky” and “Erdenko” competitions as well as the “Y. Neaman” competition in Germany. Two years ago, Anna has established the “Philharmonia” quartet made up of musicians of the Macedonian philharmonic that has successfully performed on the domestic and international stage. Anna is the concert master of the Macedonian philharmonic and is principal concert master of the recording orchestra “F.A.M.E.’S” in Skopje.

Vladimir Kostov earns his graduate and postgraduate diploma at the Faculty of music in Skopje in the class of prof. Mihajlo Kufujonakis, and attends master classes and lessons with Sihana Badivuku, Blagoja  Dimchevski, Cornelia Bronzetti, Irina Bochkova, Natalia Prishepenko etc. He has also attended chamber music classes with the “Medicci” quartet (Sweden), “Artemis” quartet (Germany) and the “Miro” quartet (USA). He has successfully won several auditions to take part in the renowned World Orchestra of JMI, thus collaborating with exceptional conductors and soloists and performing in some of the world’s best concert halls. He has also performed with the East-Weest orchestra in Altenburg, Germany and in the period 2000-2004 he is one of the violin tutors of the CEI Orchestra. With a particular affinity towards chamber music, Vladimir Kostov is a member of several chamber ensembles including the ensemble for contemporary music “Alea”, the baroque chamber studio “Bachus”, the “Brevis” quartet, and he is the founder of the “VAM” trio, a permanent member of the chamber orchestra of the Macedonian philharmonic, the JMM chamber orchestra and the contemporary music ensemble “Con Tempora”. As a soloist he has performed with the Macedonian philharmonic and its chamber orchestra in Macedonia and abroad including in Ukraine, Germany, Austria, Great Britain, Serbia, Bulgaria, Croatia, Poland, the USA. He is a member and concert master of the “No Borders orchestra” and he was also their soloist for the concert tour in 2021.

Vladimir Kostov is a founder of the festival for young violinists “Violin Fest” and is the concert master of the Macedonian philharmonic and professor of violin at the Faculty of Music in Skopje.