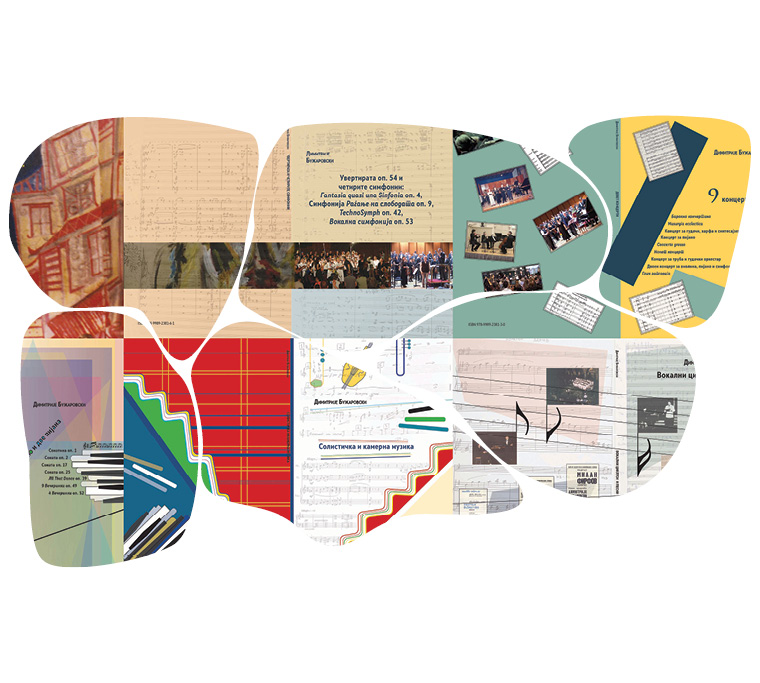 The eight-volume book cycle Dimitrije Buzarovski: Times and Music is an encyclopedic automusicological project presenting the rich oeuvre of over 170 works of one of the most significant Macedonian contemporary composers. The eight volumes cover Buzarovski’s works according to the following categories: the operas Despina and Mr. Dox and Candy Tale, the four symphonies and one overture, the nine concertos, the three oratorios and two cantatas, the works for piano and two pianos, the solo and chamber music works, the song cycles and songs, and the electronic music. In more than 1700 pages, these volumes set forth the times and social context in which these works were created, as well as provide their detailed formal, harmonic, polyphonic and instrumental analyses. The books are also illustrated by a plentiful variety of photographic material, as well as examples from the scores written in the Sibelius software which is the digital home of Dimitrije Bužarovski’s complete works.

The material presented in these volumes can also be read as a small history of Macedonian culture between the middle of the 20th century and today, as it frequently makes mention of artists and scholars who have made a lasting contribution on the development of contemporary Macedonian music.

The books have been electronically published and made available for free download on the web page of the Buzarovski Archive (BuzAr). The publisher of these volumes is the Faculty of Music – Skopje. With the launch of the publication of this seminal musicological project, the Faculty of Music and The Ohrid Summer Festival are effectively marking Dimitrije’s Buzarovski 70th birthday, bearing in mind that Buzarovski has been a professor at said Faculty for several decades and has served as Dean twice. Additionally, he has maintained a lasting connection to the Festival, where he has served as President of the Council, Selector, as well as Member of the Legal Committee. Many of his works have been performed at the Festival, with Buzarovski as performer himself, too.

The book launch also features a video projection which allows the viewers to journey through the pages of these volumes via a selection of audio and video materials from the performances of Buzarovski’s works.