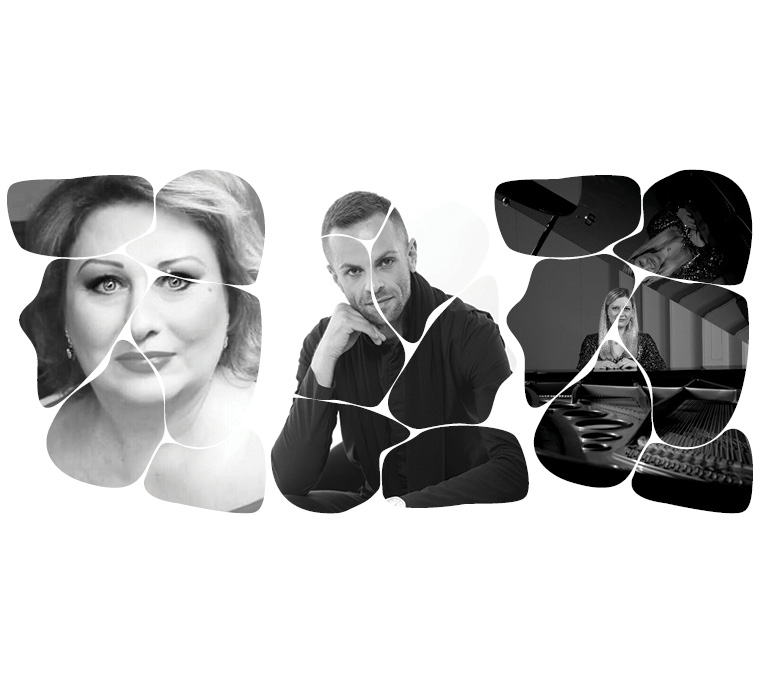 Vesna Ginovska-Ilkova graduates at the Faculty of music in Skopje in the class of prof. Milka Eftimova, and earns her master’s degree in Belgrade in the class of Radmila Bakocevich. In her versatile operatic work, she has portrayed over 20 leading soprano roles. Her debut comes as Micaela in “Carmen” alongside the Russian tenor Sergei Dubrovin in 1996, and her international debut is as Elisabeth in “Don Carlos” at the Sofia opera in 1998 as part of the international singing competition “Georgi Hristov” with the world-renowned Nikola Gjuzelev. She has appeared as Donna Eleonora in “La Forza del Destino”, Tosca in “Tosca” and Elisabeth in “Don Carlos” at the Sofia Opera, she was in the title role of Tosca in a production of the Plovdiv opera, followed by Aida in Copenhagen. With this role she also appears at the opening of the Opera festival in Antalya and repeats it at the Sava Centre in Belgrade and at the Histria festival in Pula, Croatia. She sings Gioconda in Rijeka, Desdemona in Ljubljana, Leonora in “Il Trovatore” at the Belgrade opera and appears in Russia at a concert promoting Macedonian music. In 2014 she has her debut recital in New York singing works by Macedonian composers. Her repertoire also includes the roles of Cio-Cio San in “Madam Butterfly”, Santuza in “Cavalleria rusticana”, Lady Macbeth in “Macbeth”, Leonora in “Simon Boccanegra”, Turandot and Liu in “Turandot” and many more. Her repertoire also includes numerous vocal-instrumental works such as the requiems of Mozart, Verdi, Britten and works by Haydn, Pergolesi, and Bruckner. For her operatic accomplishments, Ginovska-Ilkova is awarded the prize “13 November” by the City of Skopje, Golden mask in 2006, the award “Golden Lyre” from the Association of musicians of Macedonia and in 2014 she was presented with the prestigious Virtuosi Award. In 2019, Vesna Ginovska Ilkova is the recipient of the highest state award “St. Kliment Ohridski”. Since 2006, she teaches singing at the Faculty of music in Skopje.

A honours graduate of the Faculty of music in Skopje in the class of Biljana Jovanovska, Gjorgji Cuckovski specializes opera singing with pfor. Olivera Miljakovic in Vienna and earns his master’s degree with Boris Trajanov in 2019 at the University “Goce Delchev” in Shtip. During the period 2010-2014 he was the president of the board of the Macedonian opera and ballet and is the Artistic director of the opera between 2014-2018. He has also been the artistic selector for the music programme of the Ohrid summer festival in 2018.

Cuckovski is a principal soloist of the Macedonian opera and his repertoire covers all the title tenor roles of the house. He debuted on the international stage in 2006 in Italy, and has since performed in Novara, Lecce, Brindisi and Taormina, as well as at the Puccini Festival in Torre del Lago. His international engagements take him to Turkey (with the Istanbul Symphony), Bulgaria (with the National opera in Sofia and the Opera in Varna), France, Russia, Portugal, Germany, Austria, Switzerland, Albaina, China (with the Shanghai Philharmonic, Indonesia, Japan, Koraea and the USA where in 2016 he has a solo recital in New York. He shares the stage with opera stars such as Inva Mula, Daniella Dessi, Tzvetalina Vassileva. In the concert he is the tenor soloist in Mozart’s Requiem and Beethoven’s Ninth Symphony.  Cuckovski is a principal of the National opera and ballet since 2007 and is also teaching at the Faculty for audio-visual Arts- ESRA.

Kristina Svetieva is one of Macedonia’s most talented young pianists with a significant concert activity. She graduates with honours from the Faculty of music in Skopje in the class of her father Todor Svetiev and ears her master’s degree in 2008 mentored by Zheni Zaharieva with whom she also specializes at the “Schola cantorum” in Paris continuing to earn her doctorate with the same professor in 2014.

Kristina Svetieva has performed on all concert platforms in Macedonia (Ohrid Summer Festival, Skopje summer festival, Days of Macedonian music, Golden lyre) and abroad in Turkey, Italy, France, Bulgaria, Sweden, the Netherlands, Croatia, Czech Republic, and USA). She is a recipient of important state and international prizes. Svetieva debuted as a soloist with the Macedonian philharmonic at the age of seven, and has continuously performed with this orchestra as well as with the symphonic orchestra of the Faculty of music. She has performed recitals in Sofia, Stockholm, Paris and has also had her New York debut as an accompanist for Vesna Ginovska Ilkova.

In 2018 Svetieva has released a CD with French music for piano four hands. She is a professor at the Faculty of music in Skopje.