String Quintet of the Zagreb Philharmonic 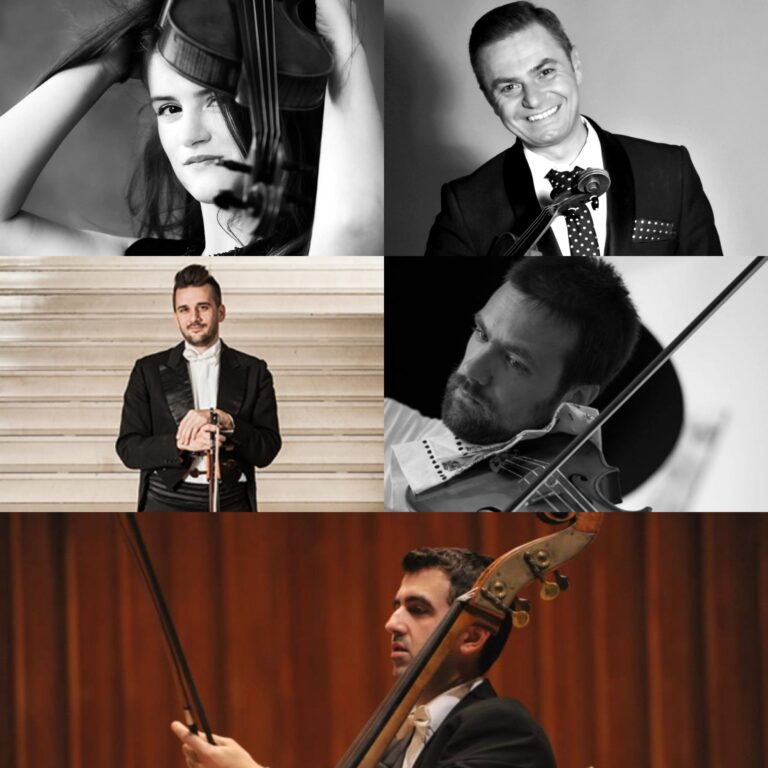 In the year that is behind us, when many musicians were forced to stop playing due to the pandemic, a group of Zagreb Philharmonic members decided to continue rehearsing and playing while respecting all health-related restrictions and recommendations. The five members of the ensemble have a respectable experience in chamber music, but this was the first time they joined forces in creating music in this kind of formation- which has benefited both them and their limited audience in a year that many felt has “silenced” music. While they have only existed for a short time, they have won over the hearts of the audience and critics alike. For their appearance at the Ohrid Summer Festival the Quintet has invited Vladimir Kostov, concert master of the Macedonian Philharmonic as their guest leader.   Vladimir Kostov is concertmaster of the Macedonian philharmonic, soloist, chamber musicians and professor at the Faculty of music in Skopje. Apart from his performances with the orchestra, he appears as soloist with the full orchestra and the Chamber orchestra of the Philharmonic, has been selected to take part in several sessions of the Jeunesses Musicales World Orchestra and is a founder and member of several chamber ensembles including “ALEA”, “Bachus”, “V.A.M”, “Brevis” and “Con Tempora”. He is a great supporter of young musicians and is the founder and organizer of the festival for young violinists “Violin Fest”. Dunja Bontek is associate concert master of the Zagreb Philharmonic and member and collaborator of several Croatian ensembles such as the Varazdin chamber orchestra, Croatian baroque orchestra, Zadar Chamber orchestra and the Zagreb Soloists. In addition, she is a member of the “Metropolitan” orchestra in Vienna and prior to her position at the Zagreb philharmonic, she was associate leader in Orchestra of the Croatian RTV. She has won several awards including the one of most perspective young musician in Croatia. Ilin-Dime Dimovski is a Macedonian double bassist with international career who has been a member of the Zagreb Philharmonic for over a decade. He studies in Great Britain (at the Guildhall School of Music) and graduates and earns his MA at the “Giuseppe Tartini” Music conservatoire in Trieste. In Zagreb he collaborates as a soloist and orchestra member with the Zagreb Soloists and the Croatian chamber orchestra. He is a tutor an project leader of the double bass section of the Summer music camp in Groznjan. He is a founder of several chamber ensembles that consist of renowned Croatian, Macedonian and international musicians. Aleksandar Ivanov-violin Aleksandar Ivanov, the youngest winner of the prize “Virtuosi” for the best young artists in 2015, was born in one of Macedonia’s oldest music families. Currently he is a student of Laurie Smukler at the Julliard school of music in New York.  Among the many prizes and accolades, Aleksandar is a laureate of the Sankt Petersburg violin competition, he is a winner of the first and special prize of the Danube symphony orchestra and many more.  He has performed as a soloist with the Macedonian philharmonic, Jeunesses musicales chamber orchestra, Danube Symphony orchestra in Budapest, Classic FM orchestra in Sofia et collaborating with conductors such as Borjan Canev, Marin Alsop, Andras Deak, Vesko Panteleev, etc. Aleksandar is constantly performing on the stage in Macedonia and abroad. During his studies in Vienna, he performed at numerous concerts as a soloist and chamber musician, and he took part at the European music festival in Sofia, Violin Fest and Golden lyre in Skopje, Curtis Summerfest in Philadelphia, while at the festival Days of Macedonian music he gave the world premiere of the Violin concerto of his older brother, composer Filip Ivanov. Aleksandar Jakopanec-violin

A graduate of the Music Academy in Zagreb, Aleksandar Jakopanec continued to study at the Columbus University School of Music. He holds a post in the viola  section of the Zagreb Philharmonic and is the leader  of violas in the No borders orchestra. In addition he is the co-founder of the Croatian string quartet and a member of the Zagreb soloists, Croatian baroque ensemble and Varazdin chamber orchestra. He performs on the viola d’amore which gives him the opportunity to explore the baroque repertoire. An avid chamber musician and soloist, Jakopanec has appeared at numerous festivals and is the artistic director of the AmadeusFest festival in Bjelovar.