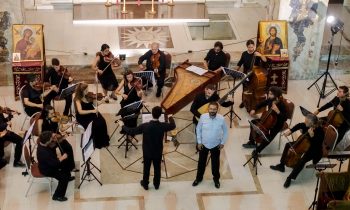 An unforgettable evening for the audience at the Ohrid Summer Festival was performed by the opera singers Rei Cenez from the USA, Fani Antonellou from Greece and the Macedonian artist Igor Durlovski who performed last night in the church “St. Sophia” accompanied by the Greek baroque orchestra “Armonia Atenea”.

Macedonian opera singer Igor Durlovski presented himself as a countetenor to the late aria “Verdi Prati” from the “Alčina” opera by Georg Friedrich Handel.

– For last night’s concert I can say that this is a great ensemble. Excellent colleagues were soloists, says Durovski.

It is noteworthy that he does not often act as a countertenor in Macedonia.

“I have performed on the scenes outside, but now it’s the second time I am singing countertenor arias in Macedonia, and I am especially glad that in this way I presented myself to the Macedonian audience, but also the audience that comes from,” adds Durlovski.

According to him, the pleasure of last night’s performance is even greater due to the acoustics held by the cathedral church “St. Sophia” which is one of the traditional scenes for the musicians of the Ohrid Summer Festival.

– Whenever I play at “Ohrid Summer”, as for every artist, not only Macedonian, but also foreign, is a great pleasure. I am very glad to have performed in the church “St. Sophia”. I am awakening beautiful memories because my first performances were in “Saint Sophia”, and I always look back to the beautiful memories. In my fifteen-twenty years, as I play in front of my home audience, but also in Europe, I was one of the privileged and I often performed on most scenes of “Ohrid Summer”, says famous opera singer Igor Durlovski.

The conductor of the concert was George Petrou who is also artistic director of the orchestra “Armonia Atenea”, which regularly holds concerts, travels on tour, and records numerous materials. “Armonia Athenaea” was founded in 1991 by the association “Friends of Music” in Athens and is one of the most active European ensembles with a significant presence on the international scene.