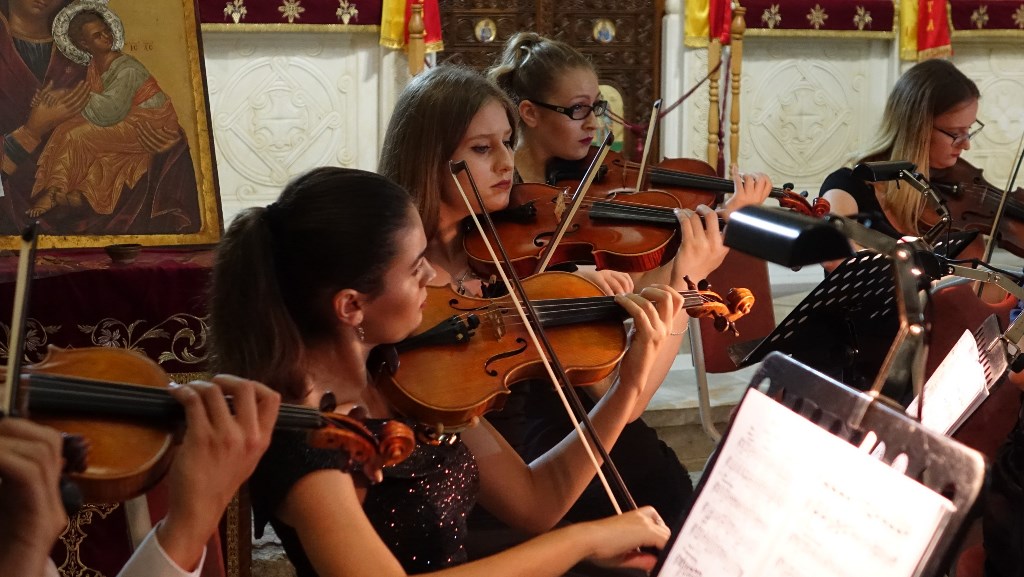 The Chamber Orchestra of the Music Youth of Macedonia, within the framework of “Ohrid Summer”, held the traditional concert last night, live and broadcast via the Internet and facebook pages of the festival.

The performance of young artists aroused the admiration of the audience in the church “St. Sophia” and the concert repertoire was composed of relatively famous composers like Edward Grieg with Holberg’s Suite, through the summer of the seasons of Astor Piazzola and Antonio Vivaldi, and compositions were also performed from Bela Bartok, as well as Elena Blazi and Anton Arenski.

– Every year we try to have a varied program, so, through the years, we had a baroque opera performed in the church “St. Sophia” and that neither before nor thereafter had such a performance. This year, the artistic director Oleg Kondratenko decided together with us for an interesting program with relatively famous composers, says the President of the Music Youth of Macedonia, Aleksandar Gerasimovski.

The music youth of Macedonia for 32 years is part of the festival program of “Ohrid Summer” and every year brings young but exceptionally talented young artists.

-More young people from Macedonia, and sometimes from abroad, that is, about 350 young musicians and soloists all these 32 years have proliferated at the festival. Some of them are members or concert masters of world orchestras and performers, programs that marked one youth, one flight, one for joint music and socializing. The products are already put on several sound carriers, added Gerasimovski.

This year, the Chamber Orchestra of the Music Youth of Macedonia received its additional name in honor of the late Sasa Nikolovski-Gjumar, conductor and artistic director who worked with the orchestra for more than 20 years and left an indelible mark on the program and in the education of young musicians.