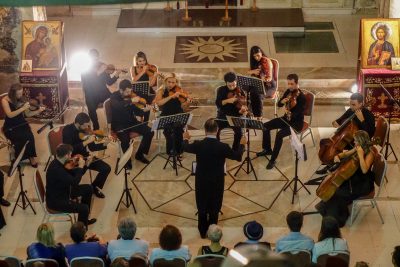 According to the President of the Music Youth of Macedonia, Aleksandar Gerasimovski, the regular performances in Ohrid are the result of the excellent image of the “Ohrid Summer”, but also the acoustics and the space in the church “St. Sophia”.

– The concept is to connect the young people through socializing, playing a good program, but also to enjoy the beauties of Ohrid. Practically this is one of the few projects that has been in the region of Southeast Europe for 31 years, and I think a bit wider. The composition, of course, changes every time. There is a fluctuation of young people. Some play five or six years with the orchestra, then graduate from college or continue their professional career, and we are trying to constantly have new people who will enjoy all that, says Gerasimovski.

The young musicians under the baton of Italian Gianluca Martinezzi performed works by B. Bretin, R. Shhedrin, G. F. Hendl, VA Mozart, and A. Shnitke.

For long years of “Ohrid Summer” performances, Gerasimovski says that they are a result of the excellent cooperation with the festival.

– The cooperation with the festival “Ohrid Summer” has always been very correct. We never had any problems. I hope that this orchestra will never die and that this unique festival tradition in the world will continue in the future, believes the President of the Music Youth of Macedonia, Aleksandar Gerasimovski.

From this year, the orchestra will be named after the prematurely dead artistic director of this musical composition, conductor Sasha Nikolovski – Gjumar.

– I think that Sasha Nikolovski-Gjumar deserved all this for over 17 years with the orchestra, creating a program, conducting and socializing with all of us, adds Gerasimovski.

The Chamber Orchestra of the Music Youth of Macedonia has existed for more than 30 years. It was founded as the first segment of the Summer Music Camp of the Music Youth in 1986 in Ohrid. This ensemble is the first and only one of its kind in the region of Southeast Europe. More than 300 young musicians, mostly students from the Faculty of Music Arts in Skopje, but also young musicians from other countries participated in his existence. With its music throughout this period, the orchestra has been imposed on the music public not only as a necessity, but as a performing composition with highly professional qualities.