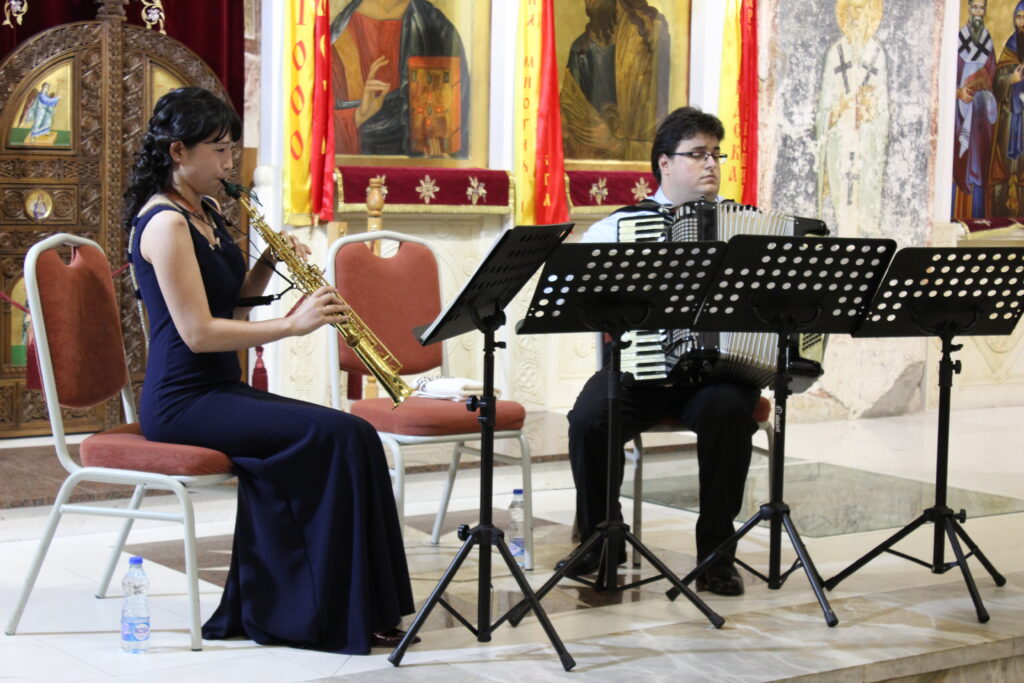 A magical blend of traditional songs and works of classical music made the duo “Sora” last night in “St. Sophia” church holding a concert within the framework of the “Ohrid Summer Festival”.
Japanese saxophonist Uchida Shiori and Macedonian accordion player Fati Fehmiu, who have been performing as duo for three years, have performed the traditional songs “Kaval sviri” and “Ergen dedo” from this year, but they also received traditional Japanese compositions as and works by Johan Sebastian Bach, Antonio Vivaldi, Astor Piazzola, Alessandro Marcello, Alexander Borodin and Bela Bartok.

The artist Fehmiu says that such a mix of music from different genres so far has proved to be very interesting for the Japanese audience.
-I am currently a doctorate at Tokyo University and my colleagues are researching in the field of music. That’s why we make combinations of traditional and classical genres of music and the like. In Japan this is very popular. It’s about a unique form of music, says Fehmiu.

The “Sora” duo were amazed by the acoustics and the entire atmosphere in which they performed last night in front of the audience of “Ohrid Summer”.
-I live in Istanbul and I have played music in the churches “St. Irina” and “St. Sophia”, I have performed in Italy and France and I have experienced similar acoustic effects on the scenes. But the church “St. Sophia” in Ohrid impresses both in terms of acoustics, and in terms of the fresco painting on the walls which, in my opinion, is well preserved, adds Fehmiu.

This young artist, whose roots are from Macedonia, although living in Turkey, nevertheless, as he explains, always carries the Macedonian culture in the heart and represents it everywhere he has the opportunity to perform.
– Although I live in another country, my heart is always connected with Macedonia, with Macedonian culture and people here. I want to present the culture of my country wherever I play, says Fehmiu.
The duo “Sora” regularly perform at various events, performing their compositions, arrangements for famous works, as well as works of classical music, traditional and folk music, as well as film music, playing on various instruments – saxophone, harmonica, piano, violin and the like.