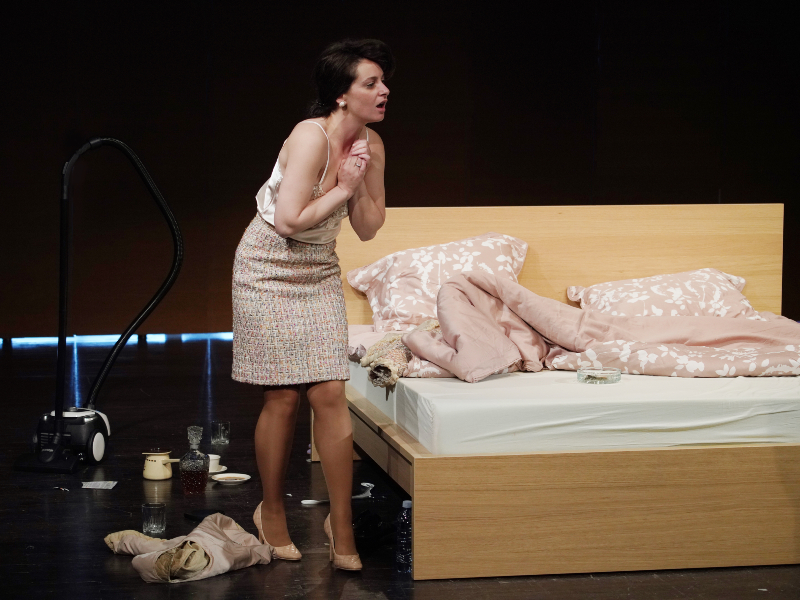 The penultimate night of this year’s 61st edition of the Ohrid Summer Festival is reserved for the Yugoslav Drama Theater in Belgrade, the Republic of Serbia, and the theatrical play “My Husband” by Rumena Buzarovska, directed by Jovana Tomic.

Serbian actresses Jovana Belovic and Sanja Markovic will play on the stage “Dolni Saraj” from 9 pm.

Rumena Buzarovska in the collection of short stories “My Husband” creates portraits of different women, and the point of their connection is the fact that men are the central focus of their lives and actions. Rumena, creating the characters of her heroines, bravely, rudely and wittily plays with all the common places of the local context, precisely forming the iconography of the patriarchy in which we are all trapped. The dynamics of the relationship is always the same – the man is on the pedestal, while the woman in the gray zone of existence realizes her goals and needs without disturbing or endangering the male position and power. Rumena does not question or criticize this broader context that determines the relationships, actions and events of the characters. She protests against patriarchy and says – patriarchy is our reality and will be for a long time. In such a socio-political context, where men are not well either, she tells us stories about women we all know, who are our closest surroundings, and often we are.

Jovana Tomic, completed her basic diploma and master studies at the Faculty of Dramatic Arts in Belgrade, at the Department of Theater and Radio Directing, in the class of Alisa Stojanovic. At the Yugoslav Drama Theater, she staged a play by Mr. E. Lessing “Nathan the Wise” (2019). She directed the plays: “Mr. Biedermann and the arsonists”, “Hilarious Darkness” (Atelier 212), “Cabaret Nusic” (Zoran Radmilovic Theater, Zajecar), “Lolita” (Madlenianum), “Barefoot in the Park”, “Lisistrata” (Subotica National Theater), “Waiting for the Future” (Paolo Grassi), “Exodus” (Dragstore, 20/44) and many others. He is the winner of the first prize of Radio Belgrade 2, in the competition for radio drama “Neda Depolo”. The play “Movement” brings her six awards within the 65th Sterjino Pozorje Festival.

The theatrical play “My Husband” is not recommended for people under 16 years of age.