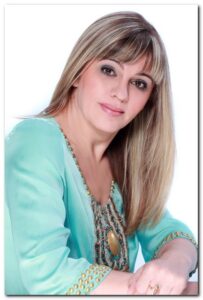 Prof. Gordana Josifova-Nedelkovska earned her graduate and postgraduate diploma from the Faculty of Music in Skopje in the class of prof. Kiro Davidovski and continued to study at the Mozart Academy in Warsaw, and the BANFF center in Canada. She is a recipient of numerous awards from state and international competitions.  As a soloist she has performed with the Symphonic Capella of Sankt Petersburg,  with the chamber orchestra “Musica Viva” conducted by Alexander Rudin,  the Cervantes Philharmonic in Spain, Kymi sinfonieta in Finland, the Wilach orchestra in Austria, the Moravian Philharmonic in the Czech Republic, Tallinn Sinfonieta in Estonia, the symphonic orchestras in Rome and Belgrade, the chamber orchestra of the Slovenian Philharmonic, the chamber orchestras “Sofia Soloists” and “St. George Strings”, the Macedonian philharmonic orchestra and Macedonian chamber orchestra, the European chamber orchestra, the orchestra of Porto Alegre in Brazil etc. In recital she has performed in Canada, the USA, China, Brazil, Estonia, Netherlands, France, Belgium, Spain, Portugal, Poland, Italy, Germany, Czech Republic, Russia, Ukraine (performing alongside violinist Nigel Kennedy), Finland, Turkey, Greece, Bulgaria, Croatia, Slovenia, Bosna and Herzegovina, Serbia, Montenegro and Macedonia. In 2009 she was invited to play as a soloist by the great conductor and composer Ennio Morricone at the opening concert of the Ohrid Summer Festival. Following her debut at the “Art November” Festival in 2010 in Moscow, and the excellent reception by the critics who describe her as “a poet on the oboe”, Josifova- Nedelkovska is frequently invited to perform in Russia at festivals such as the Bach Marathon in 2011 and the Mozart Marathon in 2014.

In the period 2007-2016 Gordana Josifova –Nedelkovska is selector of the music programme of the Ohrid Summer Festival, and is active in her work in several important music organizations. She was vice-dean of the Faculty of Music in two mandates, and after that she was elected Dean of the Faculty, a post she held for two consecutive mandates.

For her artistic work, she has been awarded numerous prizes including the prize “13 November” by the City of Skopje, the prize “Virtousi” for international affirmation and she is also a recipient of the prestigious ordain of the Republic of France “Chevalier dans l’Ordre des Arts et des Lettres”. Her international recognitions comes also from the USA, where the American biographical institute has included as nominated her for the category “Successful women of the 21st Century”.