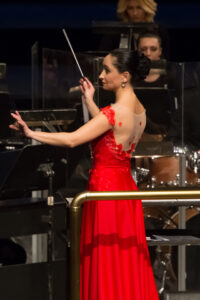 The oratorio “Radomir’s Psalms” op. 47 by Dimitrije Bužarovski is based on the writings of the deacon Radomir from the second half of the 13th century. It is considered one of the last Old Church Slavonic manuscripts written in the old tradition of Cyril and Methodius, whose origin is from Macedonia. Bužarovski combines several psalms with Radomir’s other writings in  the Book of Psalms to build the plot of this oratorio. Dimitrije Bužarovski (1952) is one of the most prolific Macedonian composers, having written more than 70 works, including several symphonies, three oratorios, seven concertos, two operas and two ballets, as well as numerous sonatas and song cycles. “Radomir’s Psalms” is the only Macedonian work to have been nominated for the prestigious international Grawemeyer Award for music composition in 2003 on behalf of Louisiana Tech University. “Radomir’s Psalms” will be performed by the choir and the orchestra of the Macedonian Opera and Ballet, conducted by Bisera Čadlovska. The soloists feature the sopranos Slavica Petrova Galić аnd Vesna Gjinovska Ilkova, the tenor Blagoja Nacoski, as well as the bass Vladimir Sazdovski – all performers with distinctive international careers. The performance also features the children’s choir “Piccolo”, directed by Vesna Dimčevska.