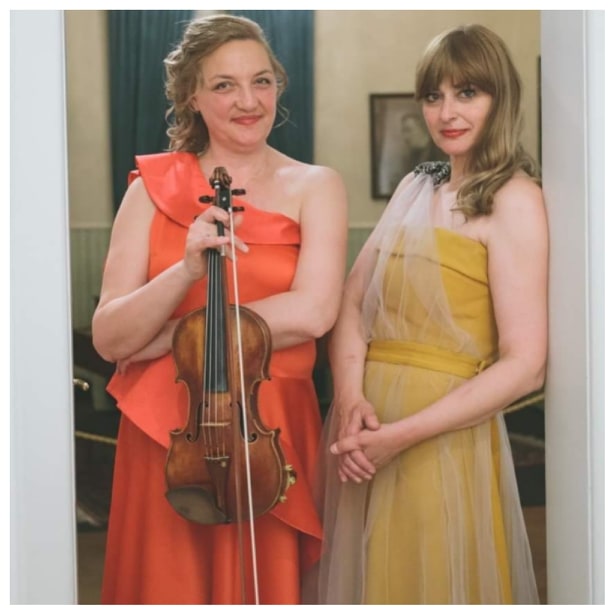 Sihana Badivuku –Hoxha is considered to be one of the finest musical artists of her generation. Coming from a music family she started her studies at a very early age finishing the music high school in Prishtina while working with Pavel Vernikov, Vancho Stoilkov and Blagoja Dimchevski. She continues her education at the Conservatorium “P.I. Tchaikovsky” in Kiev with Bogodar Kotorovich, and goes on to earn her graduate and master’s degree in Moscow in the class of celebrated Evgeniya Chugaeva. She was a scholarship winner to study at the School of Music in Detmold with prof. Jung Uk Kim. Sihana Badivuku’s career takes her to the concert podiums of renowned festivals such as Ohrid Summer Festival, Days of Macedonian Music, Contemporary music festival in Tirana, Remusica in Prishtina, the Varna Music festival, Interfest in Bitola as well as festivals in Italy and Spain. As a soloist she has performed in Albania, Macedonia, Italy, Spain, Turkey, Bulgaria, Germany, Russia, Finland, Ireland, Belgium, Ukraine, Lithuania, Slovenia, Canada and the USA. As a recognized pedagogue she continues to pass on her knowledge to a large number of students in different countries. Since 1992 she is a professor at the Faculty for Arts in Prishtina, and since 2000 she is the concert master of the Kosovo Philharmonic. In 2011 she was also appointed concert master of the Albanian philharmonic, and in 2008 she starts her teaching career at the State University in Tetovo. During all these years she is invited to be a jury member at various international competitions. She is the violinist of the ensembles “Vivendi”, “Musica Balkanika” and String trio “Kosova”. In 2011 her CD of Brahms sonatas with pianist Youni Somer is published in Finland. Between 2010 and 2019 she was the chairman of the European association of string instrument pedagogues in Kosovo. Sihana is the founder of the Chamber music festival in Kosovo in 2000, and in 2003 she starts the foundation “ArsKosova” which also organizes the Competitions for young musicians and a Chamber music festival. Her collaboration with pianist Maja Kastratovic dates back to 1994 and since 2000 she has a regular collaboration with US pianist Derek Han, as well as with violist Blerim Grubi and cellist Arisid Prosi. In 2016 Sihana Badivuku was invited to take part in the series of concerts “Spectrum concerts” at the Berlin philharmonic chamber hall

Maja Kastratovic was born in Skopje where she starts learning the piano at the Music and ballet centre “Ilija Nikolovski-Luj” in the class of prof. Slagjana Jovanovic and continues at the Central Music school in Moscow with S. I. Gadjiev. In 1993 she graduates at the “P. I. Tchaikovsky” conservatorium in the class of L.V.Roshina, and earns her postgraduate diploma in the class of Professor Boris Romanov at the Music Academy in Skopje. As a concert pianist she performed with the Macedonian philharmonic and has also played in Russia (Moscow and Sankt Petersburg), London (Great Britain), Rome, Genoa and Gorizia (Italy), Chicago (USA), Krumlov (Czech Republic), Graz and Villach (Austria), Ljubljana, Maribor and Celje (Slovenia), Belgrade and Novi Sad (Serbia). She has also performed at festivals in Spain, Italy, Albania, Montenegro and all relevant festivals in North Macedonia.

For her work as a musician and a pedagogue, Kastratovic has been awarded numerous prizes and her work has been acknowledged by taking part in various juries at international competitions in Slovenia, Albania, Serbia and Macedonia. She is the recipient of the award “Franc Berneker” for outstanding accomplishments in the field of culture by the mayor of Sloven Gradec. Since 2001 she is permanently living and teaching piano in Slovenj Gradec and Slovenske Konjice in Slovenia. Her students are recipients of many prizes in Slovenia and abroad. In 2016 she joins the trio “Phonos” and they perform in Slovenia and Austria