Sonata for violin and piano at “Ohrid Summer”

Within the framework of the musical program at the Ohrid Summer Festival tonight in the church “St. Sophia” at 9 pm, the concert will be held by the German violinist Rudens Turku and the German-Ukrainian pianist Milan Cernjavska.

Violinist Rubens Turku experiences his debut in America, after which his concert activity takes a swing and he appears in the largest concert halls in the world and the most prestigious music festivals in Germany. On these performances, Turku is celebrated as a soloist and chamber musician with performers: Julia Fisher, Alban Gerhard, Anna Chumachenko, Milan Chernyavska, and a number of significant musical ensembles and orchestras. His discography covers several compact discs well received by listeners and the professional public. He is also successful in the field of educational activity. Namely, Turku is a professor at the State Conservatory in Vorarlberg, Austria, at the Perrosi Academy in Biella, Italy, and regularly holds master classes in several countries around the world. 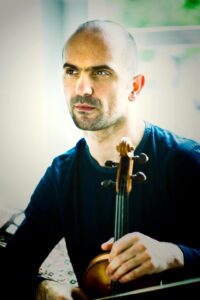 German pianist of Ukrainian origin, Milan Cernjavska, is considered one of the leading pianists of today. She is constantly present on the world stage, at international festivals in almost all major music centers. Her artistic achievements have been rewarded with numerous national and international awards. Apart from the solo activity, Chernyavska is also known as a chamber performer. In her discography, there are dozens of CDs, made in collaboration with famous record companies. For them, Chernyavska has received several awards. He often holds master classes and can also be seen as a jury member in more prestigious piano competitions.