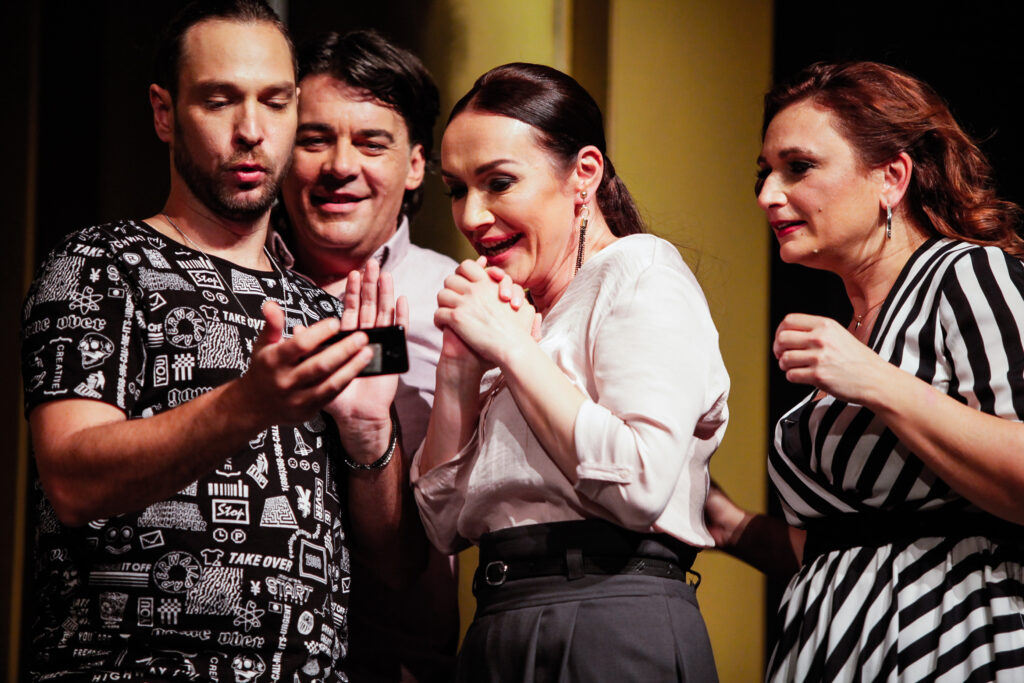 The drama program of the Ohrid Summer  festival tonight continues with the theater performance “Strangers” by Filippo Bologna, directed by Nela Vitosevic, and produced by Drama Theater in Skopje.

“Perfect strangers” is a “drama-media” in which seven friends play a game in where they exchange text messages, conversations, photos, communications through social media and thus exposing personal secrets by revealing painful conflict situations. At the same time, the differences between private and public representation are emphasized. Parallel actions create an epic scenic narrative that does not aspire to mark the end, but grows in breadth. All in the name of truth. After facing the truth, there follows a conflict with post truth, a state in which facts become less influential than emotions and personal convictions.

The role of technology in determining the truth as the dominant of today is highlighted by the emergence and disclosure of confidential documents globally. Has the world become a better place to live after the appearance of WikiLeaks? And once again, does facing the truth make us better people?

Igor Angelov, Irena Ristic, Biljana Dragicevic-Projkovska, Zoran Ljutkov, Sanja Arsovska, Filip Trajkovic and Predrag Pavlovski play the play. The playwright is Viktorija Rangelova-Petrovska, the scenery is by Kostandin Trpenoski, and the costume design was made by Roza Trajcevska-Ristovska. Composer of the play “Strangers” is Ognen Anastasovski.

The professional theater director Nela Vitosevic, higher education and master studies finished at the Faculty of Dramatic Arts in Skopje, under the mentorship of the professor Slobodan Unkovski. From 2011 to 2015 he works as a demonstrator at the same faculty, at the department acting. Her career began successfully with the diploma performance “Chicago Perversions” by David Mamet, set and performed at the Drama Theater – Skopje. Her career is further developed with the performances “Wind Wind” and “Let’s Take Off” at the Macedonian National Theater, “Summer Night’s Dream” and “Dragon’s Bride” in the Prilep Theater, “The Woman From the Past” by Roland Shymelfening, “Old Times “By Harold Pinter, etc. With the play “Dragon’s Bride”, Nela won the main state prizes and awards for theater – award for best director and award for best performance at the Festival “Vojdan Chernodrinski”. Of great importance for her development as a professional is the establishment of her independent Theater Wonderland Theater which brought freshness and different approach to the independent theater scene in Macedonia. She made several performances there: “Firm”, “5:17”, “Boat for Dolls”. For the performance “Boat for dolls” she received the main prize from the grease for the best performance at the ILO festival. Currently she is employed at the Macedonian National Theater where she prepares her new performance.

The theater performance “Strangers” will be played at the Culture Center “Grigor Prlicev” starting at 9 pm.