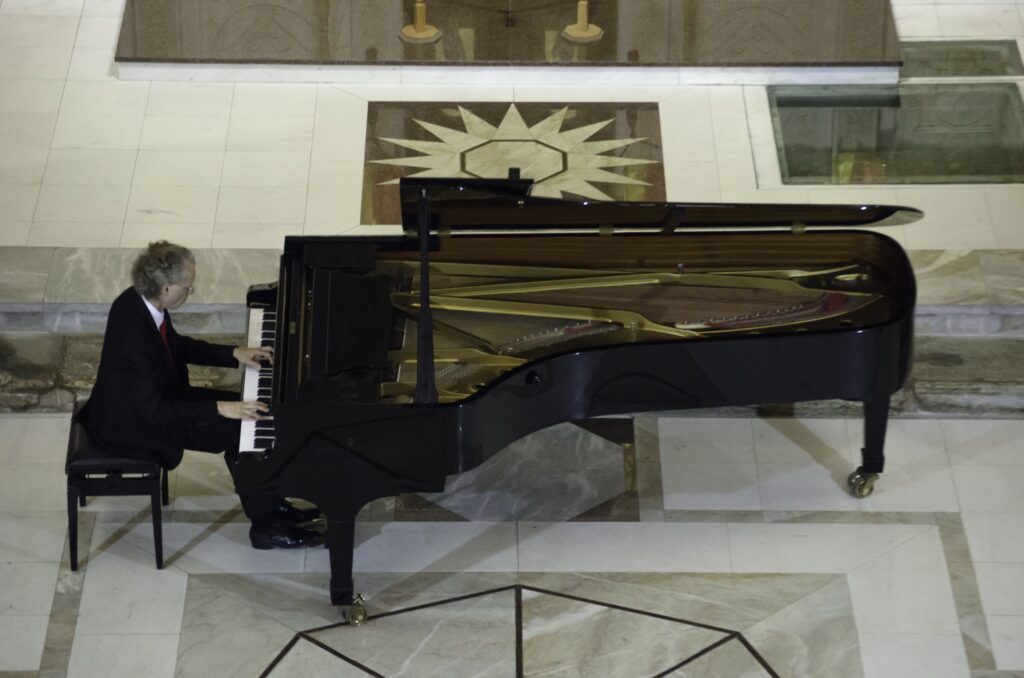 The romantic evening of the European Union with the Austrian maestro Robert Lerbaumer, one of the most prestigious pianists, last night hosted the Ohrid Summer Festival in St. Sophia church.

At the very beginning of the concert, the renowned pianist Robert Lerbaumer, one of the most prestigious pianists, announced that a world class artist is playing on the podium in St. Sophia, who can admire the audience.

-I am delighted with this magical place. Not only how it looked, but how it sounded. The acoustics were perfect. With my eyes I felt the magic, with the excellent acoustics, but the piano was also very good. For the audience, let alone not say, she was very hot, she left Lerbaumer.

-Through the program I wanted to send people to Ohrid and the festival a healthier from Austria, and that’s why the repertoire was chosen to be romantic, said maestro Lerbaumer who is performing for the first time at the Ohrid Summer Festival.

Austrian pianist Robert Lehrbaum starts his career at the age of nine when he appears on the musical scenes in Austria, Germany and Switzerland. Since then, his performances (first as a pianist, and later as a conductor and organist) have become more and more frequent in almost all European countries, where he collaborates with the world’s most prestigious orchestras. In parallel with the pianist activity, Lerbaumer manages to be celebrated as an excellent conductor and organist.

As a soloist, he performed with world-class conductors: Claudio Abdo, Yehudi Menuhin, Andre Previn and others, and collaborated with prominent performers such as Wolfgang Schneiderhan, Friedrich Gould, Volter Barry, Anton Dermotta. He is a regular participant in festivals, has made more recordings for radio and television stations, and his music is documented on gramophone records and CDs.

Lerbaumer has consistently held international masters courses all over the world. He is currently working as a professor at the Pranner Conservatory in Vienna. He has won many awards and recognitions.

PrevПретходно“Hidden, wonderful” – experience of contemporary jewelry at the “Ohrid Summer”
СледноSonata for violin and piano at “Ohrid Summer”Next