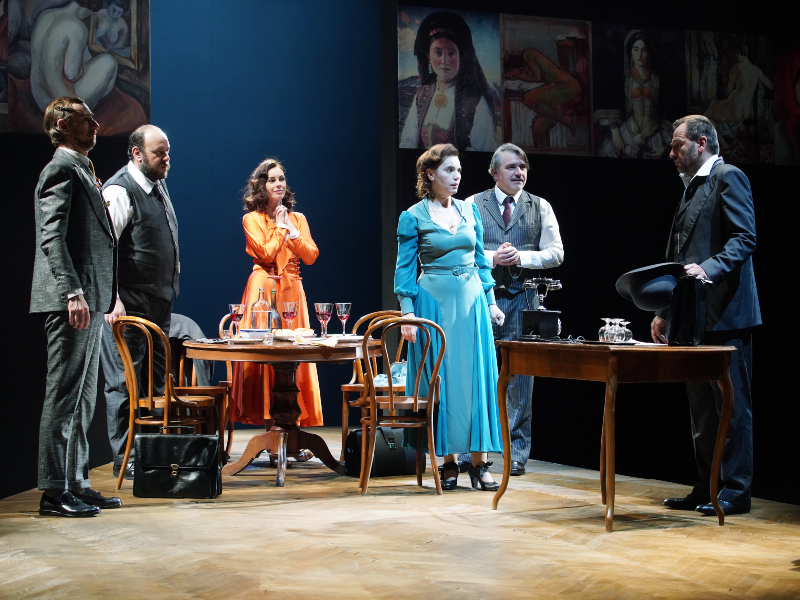 “At open sea” is a complex piece of drama- tragic, absurd, and satirical at the same time. It is a story of a love affair between a beautiful and happily married women with a minister in the government. In this play everyone is corrupt and blackmailed as they are either people in power, or people close to them. All relationships- family, friendships and love are governed by pure interest. Everyone benefits from the affair. Nushic would never write a drama about a woman’s love affair, however if that love affair involves a Government minister- then the affair becomes a political and problem of the state. It is how Nushic starts “At open sea”, a sharp satire of the political and family hypocrisy and the immense corruption of mеn, as well as their constant fear of the truth and the retaliation by the people in power.

Egon Savin is a professor at the department of theatre directing at the Faculty for Drama in Belgrade. He has signed an immense number of plays that range from classical dramatic texts to contemporary Serbian writing that he has put on in informal theatre groups as well as on the main stages in National theatres.  He has worked all over former Yugoslavia and abroad. In the Yugoslavian Drama Theatre he has directed “The suffering after Zhivojin” by Radoslav Pavlovic, “At summer vacation” by Maksim Gorki, “The Woods” by A. Ostrovsky, Molliere’s “Tartuffe”, Chekhov’s “Uncle Vanja” and many more. He has been awarded the most significant theatre prizes in Serbia and abroad.