Dalibaltajan: I take positive impressions of working with the “Ohrid Summer” 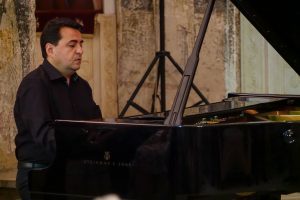 Ruben Dalibalthian, the winner of ten international competitions in Armenia, China, Croatia and Italy, last night with his masterful performance of the piano, delighted the audience at the Ohrid Summer Festival.

The Armenian pianist in a magical atmosphere in the church “St. Sophia” played the works of Chopin, Debussy and Liszt.

– I am very pleased, the audience was careful, and warm. After the performance I was tired and exhausted, actually, as after every performance, a person wears out, gives himself to the audience, and that is the essence of this profession, said Dalibaltian.

According to him, the acoustics of the space where it is played is very important for the overall print for an artist.

– The church “St. Sophia” has the most beautiful acoustics from all places where I have performed so far and it is very important for the overall impression of my performance and the concert. Modern halls often know to be unaccented, but this church is great. Ohrid is above all a city that has a soul and I really do not have any negative remarks, everything is superlative and positive. I bring only positive impressions of this cooperation with the festival “Ohrid Summer”, added Ruben Dalibalatian after the concert.

The Armenian pianist said that after the concert of the festival "Ohrid Summer", he left with impressions from Ohrid, as a city where he performed for the first time.

– I'm in Ohrid for the first time. I am here for a few days and I must say that I am already in love with this city. The weather and climate are ideal, something that would be pleased to come back to Ohrid, and this is soon, said Dalibaltian.

Otherwise, this subtle pianist whose performances always bring something new and positive, has many successful projects behind him, including the founding of a piano school in Makarska in 2005, along with his wife, Julia Gabaydulina. During his stay in Ohrid, he confirmed that he will continue to create and amaze the audience before which he will perform, and as he said, he will continue to create new young pianists.