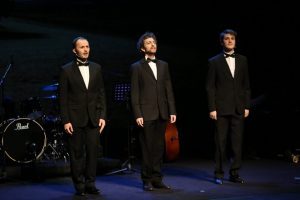 The repertoire of this year’s 57th edition of the Ohrid Summer Festival is today the theater performance – a concert show “Magic National” performed by the National Theater “I.L. Karagiale “from Bucharest, Romania.

The National Theater laughs, sings and dances in a theater show, and is another opportunity to address the joy of an ever-new and nostalgic music. With retro concert, but in modern rhythm, the concert show will bring famous actors, without a mask, only with music.

Edited Piaf, masterpiece by Anka Sigartau will be revealed, the audience will meet Tanja Popa in passionate fragments of the extensive Russian repertoire, and the strings from the battle of Bucharest will echo from the romances, mysteriously conveyed by Eileen Kadar. Mereda Marinescu and Marius Manole offer an art odyssey that will separate us from the boring everyday life and bring us into the world of music that warm your heart and whispered words. Istvan Teglas, Eduard Adam and Larry Giorgescu will tell stories about life and art that can not be described in words: pantomime, improvisation, and choreography. The youngest participants, Emilian Marnea, Petre Ancuta and Florin Calbaioos will surprise you with the shortest, happiest and most rhythmic concert, accompanied by a dozen instruments.

Host of the evening is Jon Karamitru, who in his direction promises a different musical surprise.

He is Director of the National Theater “I.L. Karagiale” in Bucharest since June 2005. He is president of UNITER – Union of Romanian Theaters – since 1990. From 1990 to 1993 he worked as director of the theater “Lucija Strasza Bulandra” in Bucharest. He is nominated and rewarded for more of his accomplishments and roles.

The performance and concert show “Magic Night” will be played in the lobby of the church “Saint Sophia” starting at 9 pm.

PrevПретходноDalibaltajan: I take positive impressions of working with the “Ohrid Summer”
СледноRomanian actors without masks entertained audience at “Ohrid Summer”Next