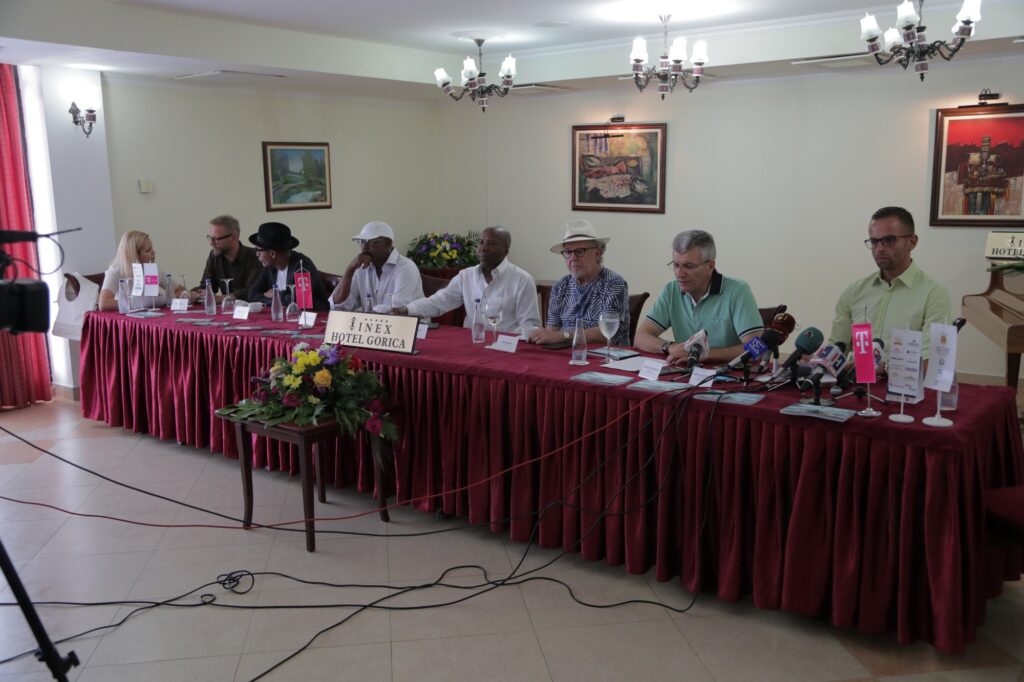 With the concert of the modern jazz quartet “Fourplay” tomorrow at the Antique Theater in Ohrid , will be solemnly open the 57th edition of the Ohrid Summer Festival .

The collective of jazz-musicians today at the press conference announced an unseen spectacle together with the Macedonian Philharmonic Orchestra under the baton of maestro Emin Djian.

The most senior member of the group, Bob James, expressed ecstasy and admiration about Macedonia, where they will perform for the first time.

– As the oldest member of the group I can say that we are excited with your country. We have performed almost all over the world, but we are here for the first time in Macedonia. It is our honor and pleasure to perform with your national orchestra. Only in this way can we feel the spirit of this people, said James.

– This country is mentioned in the Bible and it gives me a great honor to have the opportunity to come here, said Mason.

The music selector of the Ohrid Summer Festival, Gjorgji Cuckovski said that it is a great honor to announce the world renowned band of musicians, the contemporary jazz quartet “Forplay”, which for over two decades has enjoyed artistic and commercial success on the world stage, creating music that implements elements of R&B, pop music as well as other styles in their already recognizable jazz style.

Over the years, their more than 12 albums have climbed to the top of the Billboard list of contemporary jazz albums, and the band continues furthermore to explore the inexhaustible dimensions of the jazz, finding ways to get closer also to the wider audience.

– Their albums has experienced fantastic success at the public audience as well as at the critics. In the year 2015 with the album &quot;Silver&quot;, which contains a new and truly diverse sound, the group celebrated 25 years on the stage. The band in the public is known as fearless when it comes to experimenting and moving the boundaries of the contemporary jazz music , said Cuckovski.

In the forthcoming 40 festival days, the general manager of the festival Mr. Oliver Arsovski has announced a record number of 57 events.

– For the first time in the history of the Festival, at the gala opening we will have a jazz event that has caused an unseen interest among the audience. For the tomorrow’s concert many jazz lovers arrive from the whole region, said Arsovski.

The festival’s novelty are also the jazz-evenings of the 19th, 21st, 22nd and 23rd of July, and in the festival program will be 33 top concerts, nine theater plays, two ballet performances, a documentary movie about the Ohrid Pearl, exhibitions etc.

– We have an overall program that abounds with top art and attractive new contents thanks to the new selectors, the music selector Gjorgji Cuckovski and the drama selector Zoran Ljutkov, pointed out Arsovski.

He emphasized the great excitement, but also the obligation to realize this year’s festival edition, which is bearing the weight of 56 successful festival years.

– As a festival with great values on the world cultural scene, which is under the auspices of the Ministry of Culture and under the patronage of the President of the Republic of Macedonia, we wish the tradition of successful festival editions to continue also in the future, said Arsovski, who on this occasion expressed gratitude to the main sponsor Macedonian Telecom, as well as to all other sponsors, supporters and friends of the festival.

From the Ohrid Summer Festival they are announcing optimistic that the performances of the great world artists and the top theatrical performances, which will be a real artistic experience for the audience, will mark this festival edition as one of the most visited.

Starting from tomorrow until 20th of August Ohrid will live with the art. On the scenes of the Antique Theater, Dolni Saraj, the church “St. Sophia”, its vestibule, the Center for Culture “Grigor Prlichev”, as well as other interesting locations around the city, there will be happened extraordinarily attractive cultural events, in which the opportunity to enjoy will have all art lover, to what is the peak of the art in World frames.

The program offers incredible performances of world-renowned names and ensembles of musical, theatrical arts, a program for all tastes and generations, and all of this integrated in an unrepeatable innated and spiritual ambience such as is the city of Ohrid itself.