“Ohrid Summer” reached out to the youngest audience 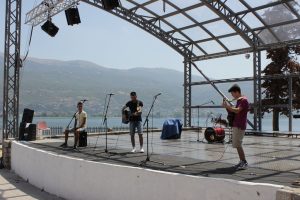 The Ohrid Summer Festival together with the youth from the “Children’s World” initiative today marked the August 12 International Youth Day. Through various cultural contents created by young people, such as exhibition, theater, music …, the goal of the project is to bring high artistic values closer to the youngest audience.

Veronika Stanoevska is a student in the secondary medical school “Pance Karagozov” in Skopje. She joined the project through her professor of music education.

– It is a great honor and pleasure to be part of this day’s event. Today is Youth Day, August 12th. Considering the youth as an important social group in the society, I appreciate that one fine and above all a cultural event should mark the day. This day is first marked in the Republic of Macedonia precisely through the festival “Ohrid Summer”.

Ana Busheva is a student in the high school “Jane Sandanski” from Strumica. On today’s arrival in Ohrid on the stage “Dolni Saraj”, it is a big challenge.

Petar Petrusev and Angela Naumovska from the technical school “Mihajlo Pupin” from Skopje are involved in the “Children’s World” initiative, thus recording and documenting the activities of the project.

– In a way we make a short documentary with which we will continue to promote ourselves. We both joined our school. At first we were called to the Zoo where we had activities with scouts and with several other organizations. We had games, we also participated in radio shows, says Petrushev.

Students from “Mihajlo Pupin” say that participation in “Children’s World” is also a kind of practice that they will use during their educational process.