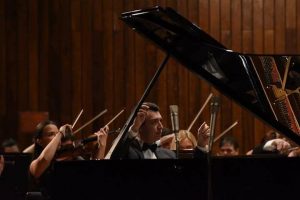 The evening of the Macedonian pianists will be held at the Ohrid Summer Festival today.

The Macedonian violinist Kliment Todoroski will perform in the church “St. Sophia” in the piano-accompaniment of Dino Imeri. The program includes works by K. Saint – Sans, S. Frank as well as the “Romeo and Juliet” ballet for the violin and piano by S. Prokofiev.

Violinist Kostadin Bogdanoski accompanied by pianist Marija Gosevska will perform works by R. Schuman, B. Smetana and I. Stravinsky.

Kliment Todoroski was born in 1984 in Ohrid. He started his musical education in Ohrid and Bitola, and continues to the National Music Conservatory in Toulouse, France in the class of professor Blagoja Dimchevski until 2002. Graduated from FMU-Skopje in the class of prof. Oleg Kondratenko. He is a participant in seminars, concerts and competitions in Slovenia, Russia, Romania, Serbia and France. He has won several state and international awards, among which: the third prize at the Petar Konjovic competition in Belgrade, the second prize at the Cornelia Bronze Competition in Romania and the first special prize at the Ohrid International Pearls International Competition. As a soloist he performs with the Macedonian Philharmonic Orchestra, Chamber Orchestra and Symphony Orchestra at the FMU in Skopje and “Ohrid Summer”, Heraclea Evenings … He participated in the realization of several projects with the eminent violinist Jovan Kolundzija, the National Chamber Orchestra of Toulouse and the Symphony Orchestra of “Capitol”.

His significant performances include the performances of the world famous pianist Simon Trpceski, the concert tour of Macedonia (2007-2008), the Easter concert – Skopje (2008), as well as the performance at the United Nations Headquarters at the invitation of President Srgan Kerim . Kliment Todoroski is a soloist at the concert, which is conducted by the world miracle of the child, conductor Ilich Rivas at the Skopje Summer Festival in 2009. Kliment Todoroski works as a concert-master in the Macedonian Opera and Ballet of 2009.

Dino Imeri is one of the most renowned Macedonian pianists of the new generation of classical musicians. He acquires his education by working with prof. Lyudmila Romanova and prof. Boris Romanov (in whose class and graduated from the Faculty of Music Arts in Skopje with a godfather), as well as with prof. Simon Trpceski, in whose class he has mastered at the age of 22, with an average of 10 and with a more respected godfather. In his previous activity, Imeri performed numerous performances in Macedonia and abroad: Zagreb (opening of the Pianofortisimo cycle), the Strasbourg Philharmonic Orchestra (French premiere of the Piano and Orchestra Concert by Damir Imeri), the Sofia Philharmonic Orchestra, As well as at festivals in Croatia, France, Kosovo, Austria … Dino Imeri is listed in the top 10 European pianists according to the rankings of the Third European Piano Competition held in Normandy, France, and is equally successful in his native country Mia. In 2013, she won the highest domestic recognition for classical music – the Virtuosi Award in the category “Young Music Artist”. In 2015 he receives the recognition “Laureate of the Foundation Tomislav Zografski”, awarded by the same name foundation for the promotion of Macedonian composers in the country and abroad. In 2010, Dino Imeri signed a two-year contract with the European Piano Program – a project that opened international scenes in France, Austria, Poland … In 2013, he released his first DVD edition with music from Haydn, Beethoven, Leaf and Brahms, in collaboration With the orchestra for recording movie music “Themes”. He regularly holds recitals, and is active in chamber music performing with various chamber ensembles.

Kostadin Bogdanoski is one of the most renowned violinists of the Macedonian classical scene. He was born into an artistic family, at an early age he began to teach violin and at the age of ten he premiered with the orchestra of the Macedonian Philharmonic Orchestra. As a young talent he has won many domestic and international recognitions. Bogdanoski graduated at the age of 20 at the Faculty of Music Arts at the University “St. Cyril and Methodius “as the youngest graduate student in the history of the University. He continued his higher education at the National Conservatory in Toulouse, France, in the class of prof. Blagoja Dimchevski, gaining Honors with a gold medal. Throughout education he has the opportunity to work with significant professor names such as prof. Anatoly Schwarzburg from the Moser Private Music School in Germany, prof. Peter Munteanu and prof. Dejan Mihajlovic from the Music Academy in Belgrade. She started her professional musical career at the National Orchestra “De Capitol” in Toulouse, France under the baton of famous Michel Plasson. In 2003, at the age of 25, he became a concert-master in one of the most respected opera houses of the Grand Theater “Lyceum” in Barcelona, ​​Spain, and as part of the Lyceum Orchestra, he is playing under the baton of world famous conductors and has the opportunity to collaborate With world famous opera singers including Placido Domingo, Rolando Vilazon and Edita Gruberova. Since 2008, he has been working as a professor at the Academic Orchestra within the Lyceum Theater. Kostadin plays on an instrument made by his father Svetozar Bogdanoski.

Marija Gosevska is one of the most prominent pianists in the Republic of Macedonia. He graduated, received and received his PhD at the Faculty of Music in Skopje, in the class of prominent pianist and pedagogue prof. Boris Romanov. She has won numerous awards and recognitions at numerous state and international competitions. As a soloist and as a chamber musician, she performs at all renowned festivals in Macedonia, but also outside of it: USA, England, France, Austria, Italy, Poland, Czech Republic, Croatia, Serbia, Bulgaria, Turkey, etc. He performs as a soloist with the Macedonian Philharmonic, and the concerts with the Symphony Orchestra in Dubrovnik, the Chamber Orchestra of the Music Youth of Macedonia and the festival orchestra at the international festival “Ohrid Summer” are also significant, working with several domestic and foreign conductors. Often he performs as a chamber musician and piano collaborator with prominent instrumentalists. Gosevska is one of the Macedonian participants in the project “Piano – Reflection of European Culture” with concerts in five countries: France, Austria, Poland, Moldova and Macedonia. In 2011, he holds an all-purpose recital at the Piano Beach Festival in Wistere, France. In April 2016, he is awarded with the prestigious “Virtuosi” Award for Best Music Performer in 2015. Maria Gjoshevska is a full-time professor at the Piano Department at the Faculty of Music Arts in Skopje.