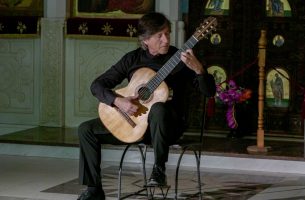 The acoustic guitar by Spanish master Ignacio Rhodes last night echoed in the church of St. Sophia. The audience of “Ohrid Summer” had the opportunity to enjoy the romantic evening that was performed by maestro Rhodes, who with his musicians managed to keep the attention and concentration of the viewers until the end of the concert. The proof that the audience that filled the church really enjoyed were the two bis performances.

– I very well remember the moments when I first played in the church “St. Sophia” in Ohrid. I was impressed by the ambient acoustics, the beauty of the city, and here I am again, in the beautiful church and the beautiful city. It is really a great pleasure to be here, said Spanish guitar master Ignacio Rhodes.

Although, it is said, 23 years have passed since his first solo concert at “Ohrid Summer”, however, the feeling of performing at such a festival with great reputation is wonderful.

Rhodes is one of the greatest and most talented masters of the guitar, which is confirmed by his performances in the most prestigious concert halls around the world. Playing in the most famous concert venues including the Opera House in Frankfurt, Hall of the Philharmonic in St. Petersburg Concert Hall in San Francisco Theater in Cairo, Chopin Museum in Warsaw, the Palace of Music in Barcelona, ​​the Center for Contemporary Music in Ankara concert hall in Mexico and many other. He has performed with the English Chamber Orchestra, the symphony orchestras in Galicia and Madrid Orchestra, Ho Chi Minh, the orchestras of Tenerife, Antalya, philharmonic orchestras in Belgrade and Barcelona etc..

Behind him there are five CDs for different record companies including EMI Classics.

Ignacio Rhodes is a professor at the Conservatory of Alicante and regularly holds master classes throughout the world.