The secret of the Ohrid pearl on movie screen 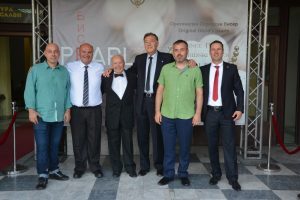 In the frames of the festival “Ohrid Summer”, the documentary-feature film dedicated to the traditional Ohrid pearl was premiered at the Culture Center “Grigor Prlicev”.

Through this joint and unique project of the families Filevi and Talevi and the brothers Kumevi, after 89 years the secret recipe for making the pearl, the unique and widely known ornament, is revealed. The film covers the period from 1924 to 1930, when the famous Russian emigrant Jovan Subanovic reveals, that is, sells the secret ingredient for making the pearls of the Filevi family.

Through the mysterious story of the real Ohrid pearl that is Ohrid and Macedonian brand, the film does not return us to our roots, through history.

– Growing up in this beautiful city, I was directly involved in the work of these two families, I watched what and how they worked, but then I was not aware of the value of the Ohrid Pearl. It is actually our Macedonian, Ohrid brand, a brand that the world should know. That is why I thank the Ohrid Summer Festival, which enabled us to make the premiere of this film to be right here on this holiday, Ilinden, and in the city of Ohrid. We continue to work on this project, we prepare for other festivals both in the country and outside our borders. This is what we have done for the soul, this is a story that touches all of us, and therefore I thank the families Talevi and Filevi for the opportunity to record and immortalize something that needs to last for generations, says the director of this project, Nikola Kumev.

With this short film, once again presents the uniqueness, authenticity and natural beauty of Ohrid.

– In this work we saw moments where all generations of families were covered and visually we decided to display the serious history of the city of Ohrid and through a common cohesion to culturally affirm our country and our city. The pearls of our families are everywhere and I am honored that together with the cultural manifestation “Ohrid Summer” we had the opportunity to promote and affirm this whole project, the history of our two families. In the future, we plan to develop the project and create a feature film, and there are some Hollywood collaborations, says Mihajlo Filev.

The original Ohrid Pearl adorns the throats of many crowned and unyielded queens around the world.

– I am happier that there was no negative comment by the audience, because she is the best critic. The meaning of “Ohrid Summer” is on a very high level and that is why I consider it to give even greater value to both the film and our tradition in making pearls, says Vane Talev.

Last year in Ohrid was promoted the monograph “The Ohrid Pearl in the Families Filevi and Talevi”. Authors of the book are Nikola Mitrovic-Babe, Doctor of Historical Sciences and Olivera Misheva, ethnologist. The initiative for this literary entry was on Mihailo Filev, one of the guards of the original Ohrid pearl.

PrevПретходноJakopovic: I want to exchange emotions with the Macedonian audience
СледноRistic-Simovic: The Ohrid audience is always on the mood for pleasant musicNext