Shun: The high reputation of “Ohrid summer”, known in China 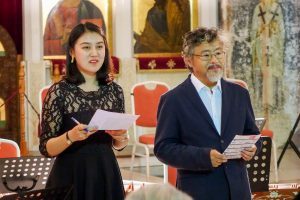 An incredible connection with the audience of “Ohrid Summer” was held by the Chinese musicians from the Chamber Orchestra ELK who held a concert last night at the church “St. Sophia”.

The loud applause and the heated ovations were a reward for their remarkable performance. Smiling faces went out after a one-hour concert exchanging excitement and positive comments about what they saw and heard on this music event.

– It is not the first time that my students perform abroad. Students do not even know how the audience would be responding, which is not from China, because it is a matter of specific, traditional music and traditional instruments. In the end, it turned out that due to the applause we received from the Macedonian audience, our countries are not at all distant. Though we are physically distant for thousands and thousands of kilometers, however, we are so close. On the other hand, the wonderful organization of the Ohrid Summer Festival allowed students to play so relaxed and feel at home, says Professor Liu Shun.

Chinese students, while playing their instruments simultaneously played with their bodies on the podium, showing that they experience the rhythm.

– These are not any students, but they are professionals because they play their instruments from three to four years of age meaning that the youngest of them already have at least 10 years of experience and are therefore systematically taught to enjoy the rhythm and what they Play, Shun adds.

The Chinese participants of “Ohrid Summer” made a real surprise with the Macedonian compositions, “Macedonian Siirt” and “Chamchee”. Although, according to their professor Shun, it was harder for them to enter a pattern with Macedonian music because they were not taught in such rhythms, yet they gladly played the selected works.

Some of the students, as the professor explains, until their arrival in Ohrid had no idea of ​​the high reputation of the “Ohrid Summer”, but the Ministry of Culture of China and the music professors were well acquainted with the festival.

-We were invited by the “Ohrid Summer” and the Ministry of Culture of the Republic of Macedonia to hold a concert at the festival, and this was an excellent opportunity for young students from our country to socialize with young students and future professionals from Macedonia. Most of them may not have heard about this renowned festival until the performance, but the professors, and also our Ministry of Culture are well acquainted with the high reputation of the “Ohrid Summer”. This festival is exactly in line with what we promote in the field of culture in our country, said Professor Liu Shun.

PrevПретходноRam-Odintsova: We enjoyed the ambiance of “St. Sophia” and in the audience’s attention
Следно“Rock Symphony” tonight at “Ohrid Summer”Next