Ram-Odintsova: We enjoyed the ambiance of “St. Sophia” and in the audience’s attention 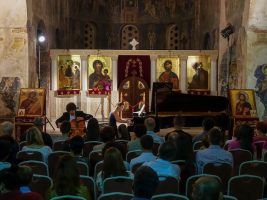 Carefully selected compositions by Russian artists, cellist Alexander Ram and pianist Ana Odintsova seamlessly fit into the ambience of the church “St. Sophia” and the audience at the festival “Ohrid Summer” enjoyed the last night’s concert.

Ram and Odintsova played the Violin and Piano Violin by C.Frank, The Cello Cello Suite by G.Kasado and Sonata for cello and piano by B.Britin.

– We really enjoyed too much in the ambient and in the audience’s attention. The church is fantastic and I could not imagine that it was built in the 11th century and all of these frescoes were made at the time. I especially enjoyed playing the Sonata of Frank because he was a very religious person. That’s why I felt tremendous warmth in me, but also responsibility for the audience. I want to play again for the audience of the Ohrid Summer Festival, which is fantastic, said cellist Ram.

For the Odintsovo artist, the “Ohrid Summer” festival, the church “St. Sophia”, Ohrid and Lake Ohrid leave a strong impression.

– Both I and my colleague could not imagine that people in the 11th century built such a building. The church’s acoustics are fantastic. I was surprised when I entered the first time in her, said the pianist Odintsov.