The Slovenian “Balkan Nuevo” will play at the “Ohrid Summer” 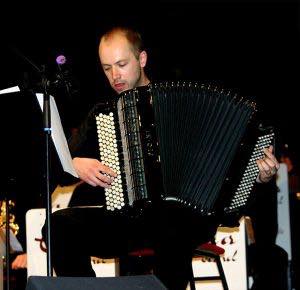 The music program of the festival “Ohrid Summer” tonight continues with the concert of “Balkan Nuevo” from Slovenia and the String Quartet from Macedonia to be held in the “St. Sophia” church starting at 9 pm.

The project “Completely Something Other” that will be presented to the festival audience includes the compositions “Balkan Circus”, “Impression”, “The Rise,” “Error”, “Prelude for the South”, “Come Back”, Macedonian folk song in the arrangement of Goran Bojcevski, “Dance”, “Klezmer for 2”, “Memento Mori” and “Waltz of the Seven Vellas”.

Goran Bojcevski is among the best clarinetists in the world. He starts his education in Macedonia, finishes undergraduate studies in Ljubljana, and postgraduate studies at the University “Mozarteum” in Salzburg. As a soloist, he successfully collaborates with top musicians and institutions around the world. He is the author of the musical style “Balkan Nuevo”, which relies on Macedonian traditional music, modernized with elements of classical and tango music.

Jan Sever is one of the most famous Slovenian pianists of his generation. He is a regular guest at concert cycles and festivals in Slovenia, Germany, Portugal and Brazil. He is a permanent member of the trio Slavko Osterc, whose specialty is the performance of works by Slovenian composers from the 21st century. He has received numerous awards at national and international competitions, including the 2004 Presernova nagrada, which is the highest artistic recognition in Slovenia.

Tomaz Marcic graduates his graduate and postgraduate studies for harmonica in Germany, in the class of prominent professors. His concert activity extends across several European countries: Germany, Switzerland, France, Croatia, Austria, Italy. As a soloist and chamber musician he collaborated with significant musicians and ensembles for contemporary music. Besides the harmonica, his passion is also choir conductor.

Jost Lampret is a Slovenian contrabassist, who in his solo activity is recording performances with the Orchestra of the Slovenian Philharmonic Orchestra, the RTV Slovenia Symphony Orchestra and collaborated with the Mediterranean Youth Orchestra. Currently he is undergraduate at the Music Academy in Ljubljana.