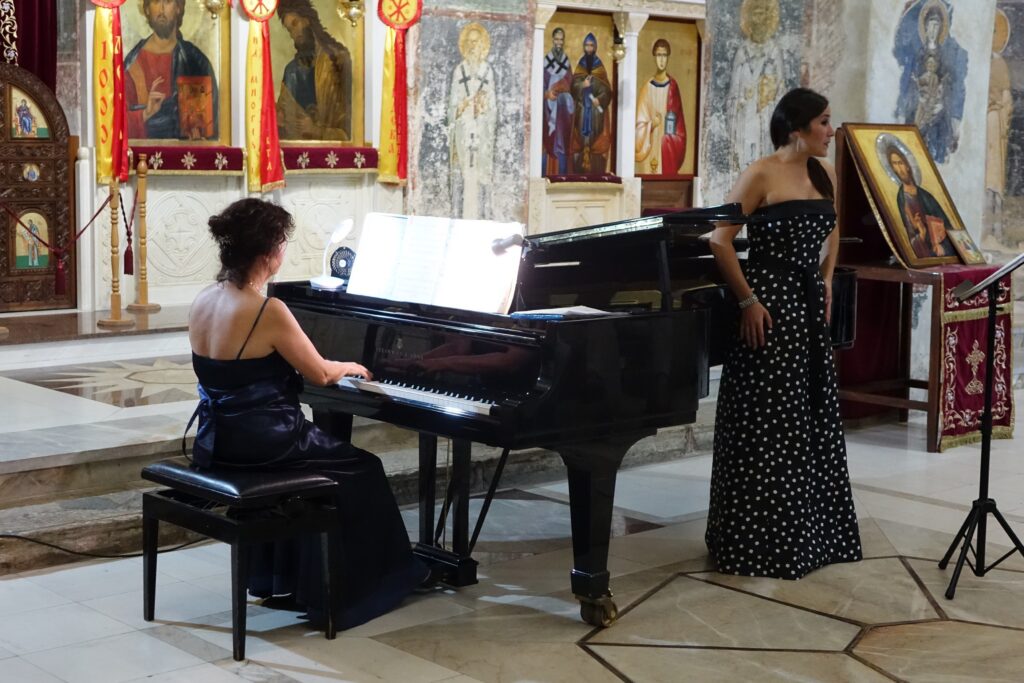 The traditional Spanish evening at the Ohrid Summer Festival brought unforgettable moments to the audience through the extraordinary voice of the soprano Eugenia Boix and the piano performance by Anna Ferrer. The two Spanish artists at the concert podium in “St. Sophia” left a strong impression, but after a late concert they were amazed at the place where they performed.

– We are back in Ohrid and in the church “St. Sophia”. This is a wonderful place and it was really great pleasure for us to perform here. We presented the Spanish music in front of the audience at this festival, says the soprano Boix.

Their repertoire was diverse, and they started with the tunes and love songs by Enrique Granados.

– In the first part we brought tonadils and love, romantic songs. There was also popular music on a French basis, yet tailored to Spanish traditional music. The second part was different from the first. We saw operettas more masculine for male performance, says pianist Ferrer.

During her career, Boix performed in several opera houses with excellent orchestras, under the baton of eminent conductors from around the world. In its repertoire, besides the operas, there can often be found orators. He also performs as a chamber musician with many famous performers and ensembles in France, Italy, Switzerland, Austria, Germany, Russia, Poland and America.

Pianist Ferrer regularly performs as a chamber musician in compositions with recognized music artists, but does not neglect her solo activity, collaborating with various orchestras in many countries of the world. At the same time he leads excellent pedagogical activity at the Conservatory in Girona, where she has been in charge of piano and chamber music for 12 years.

Eugenia Boix and Anna Ferrer met eight years ago and have been working together since then. After “Ohrid Summer”, two Spanish artists who left a strong impression on the festival audience will hold concerts in Sardinia and Milan, Italy.