Stormy applauding and “bisses” for the Zagreb piano quintet 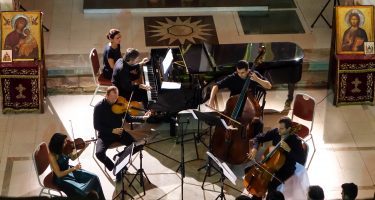 The Zagreb piano quintet last night for the audience of the festival “Ohrid Summer” organized a concert to remember in the church “St. Sophia”. The artists of this composition, who are virtuosos of their instruments, with their almost two hours music played positive energy among the present, Applause and two “basses” confirmed that they were in the program with the repertoire of works by Josef Labor and Herman Gec.

The Macedonian counterpart Ilin Dime – Dimovski, who is part of the Zagreb Philharmonic Orchestra, thinks that every artist’s desire is to perform at the Ohrid Summer Festival and in the church “St. Sophia” in which, as he explained, he grew up playing.

-This composition is played by Schubert’s trout “Trout”, but we thought it was too played. These two composers are relatively unknown and postmodern. They wrote beautiful music but simply lost their popularity over time. Otherwise it’s about pretty good music. There are romantic parts, parts of solos, parts of joint playing …

As “bis”, members of the Zagreb piano quintet have repeated the third position of the quintet of Hermann Goetz.

“There is not much work for this kind of composition, and everything else is too long for the” bis “, so we decided to repeat the third paragraph from the Quintet of Gec, the squares, added Dimovski.

The cellist Nikola Jovanovic believes that it is a great honor to be part of “Ohrid Summer”, a festival whose high reputation he has heard from small nights.

– The last night’s concerts are fantastic. I feel special emotions for Ohrid. I am so happy that I had the opportunity to play here because when I was small, it was known which festivals were great, with tradition and with performances of sound artistic names. I am particularly pleased that I am part of the Ohrid Summer Festival, says Jovanovic, who is the deputy leader of the cello section in Bamberg, Germany.

Quintet concert concert is Moldovan Alina Gubaidulina, who has been living in Croatia for 19 years and is a part of the Zagreb Philharmonic. The artist Hrvoje Phillips is the leader of the Viola section at the Zagreb Symphonic Orchestra and Federico Lovato is a famous Italian pianist.

As well as at the previous concert, which took place on Monday, at which the Choir “Municipality Pustina” from Russia took place, and last night, at the concert of the Zagreb Piano Quintet, the last place for the audience was filled in the church “Sveta Sophia”.Many of them were foreigners.