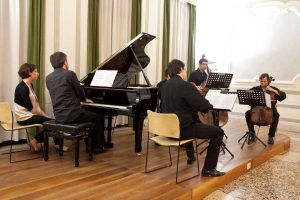 Within the 57th edition of the Ohrid Summer Festival, a concert will be held by the Zagreb piano quintet.

Violinist Alina Gubaidulina was born in Moldova, and since 1998 she lives in Croatia. She graduated from the music school in Split and graduated from the Music Academy in Zagreb in the class of prof. L. Sorokov. Gubaidullina is a winner of numerous awards and recognitions, and as a soloist he performs with the Zagreb Philharmonic, the orchestra of the opera in Split, the Split and the Croatian Chamber Orchestra. He works with numerous ensembles and orchestras in Croatia and abroad and performs at important international festivals.

The cellist Nikola Jovanovic was born in Belgrade, where he started his music education and enrolled at the Music Academy. After the successful entrance exam, he continues his studies at the High School of Music in the German city of Detmold in the class of famous musician Ksenija Jankovic, where he graduates, and in 2015 he completes the third and most complex degree of soloist studies for which he receives the highest marks and Honors. During his studies and studies he has received numerous awards and recognitions, as well as scholarships that enable him to improve with some of the world’s most famous soloists such as Gernigas, Gutman, Dindo and many others. In 2010 he became a member of the Munich Philharmonic, which through his two-year scholarship allows him to co-operate with some of the world’s most famous conductors. That same year he became a member of the piano trio “Pescatori” with which he concerts across Europe. In 2012 she was the finalist and winner of the third prize at the Strauss Competition in Munich, and in the same year became the deputy leader of the cello group at the Bamberg Symphonic Orchestra. He is a member of the Symphony Orchestra “No Borders”.

Ilin – Dime Dimovski is a contrabassist in the Zagreb Philharmonic Orchestra and performs with the Mozart Orchestra from Bologna and the Croatian Chamber Orchestra. As a guest bass player often performs with orchestras in Italy. She studied the bass at the prestigious Gylhol Music School in London, and holds a master’s degree with cum laude grades at the Conservatory in Trieste. As a chamber musician, Dimovski performs with the pianists Alessandro Bici and Hiromi Arai, with the chamber orchestra “San Marco” and the string quadette “Sapada”. As a soloist and as an orchestral musician, he performs at international festivals in Croatia, Macedonia, the Netherlands, Great Britain, Norway and Italy.

Federico Lovato was born in 1976, studied piano and graduated at the Conservatoire in Venice, and received the same conservatory with a degree in cello. He has won many awards at national and international competitions (Taranto, Alberta, Venice, Piacenza, Trieste, Sibiu), and then starts his career as a concert pianist with performances in Italy, France, Slovenia, Croatia, Poland and Germany. As a soloist he performs with several orchestras including the Symphony Orchestra of HRT, the Chamber Orchestra of Padova and Veneto, the orchestra of La Fenice Theater in Venice, the State Philharmonic in Sibiu, the Zagreb Philharmonic Orchestra and others. As a chamber musician, he performs in duo with his brother who is a violinist, but also with the choirist G. Pellar with which he formed the ensemble “Optter”, and also works with the orchestra “Ex New”. This year, he will perform on two tournaments throughout Italy, but also in Germany, Sweden and Japan. With G. Pellarin records a CD of a French repertoire dedicated to horna and piano released for “Audas”.

The concert of the Zagreb piano quintet will take place at the church “St. Sophia” starting at 8 pm and 30 minutes.