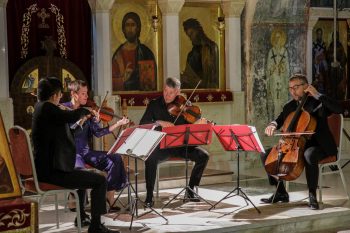 Works selected by the string quartet by Franz Schubert and Maurice Ravel, as well as “The Lyric Suite” by Alban Berg were performed last night within the framework of the Ohrid Summer Festival.

The audience in the church “St. Sophia” enjoyed in the string quartet “Diotima” composed of violinists Yun – Peng Zhao and Constanta Roncati, by Frank Shevalie of violin and cellist Pierre Morlet. The musicians from this quartet perform for the third time in Macedonia, but last night’s concert was their first appearance in front of the audience at”Ohrid Summer”.

– For several years, we tried to participate in “Ohrid Summer” through the famous composer Jana Andrievska. She talked about how successful and renowned the festival was. That’s why we wanted to come here, and here we are, we are finally here and we are very happy, “said artist Chevalier.

The performance of the festival “Ohrid Summer” is the last engagement of the Quartet “Diotima” for this season.

– We rejoice that at the “Ohrid Summer” we held our last concert for this season. Now we are going on a well-deserved vacation, added Chevalier.

In the season that follows, they will perform at the new concert hall in Hamburg, Concertgebouw in Amsterdam, London, Washington, Warsaw, Bucharest, as well as touring in the UK, Spain, Russia, the United States, Korea and Japan.

The Quartet “Diotema” was founded in 1996 by musicians at the National Conservatory of Music in Paris and has since been one of the most sought after ensembles in the world. Although known for their readings by contemporary composers, as well as after collaborations with some of the greatest music names of today such as Helmut Lahemanman, Toshio Hosokawa, Brian Fernheim and others, “Diotema” combines its programming concepts with works from the standard repertoire – especially those Ravel, Debussy, Bartok, Schubert, Beethoven, composers of the New Viennese School and Janacek.

The Quartet performs at all European scenes and festivals such as the Berlin Philharmonic Orchestra, concert halls in Madrid, London, Vienna, as well as in the United States, Asia and South America, and from 2012 to 2016, they are the main ensemble of the “Comedy” Theater in Paris.

They are winners of numerous music awards and recognitions, both for their performances and for the recorded editions. In 2016 they marked 20 years of existence with an exclusive CD release of music for the Quartet of the Viennese School.