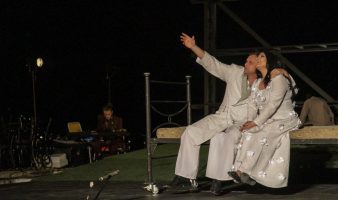 The drama program of the 57th edition of the Ohrid Summer Festival last night delivered a premiere to the theater play “Dream of the Summer Night” by William Shakespeare, directed by John Blondel, and performed by the Bitola National Theater.

Greeted by a large audience, and sent with a loud applause, the actors and the whole team of the Bitola National Theater expressed their gratitude to “Ohrid Summer”, which enabled them to premiere their project, prepared during the past months.

According to them, the director, through this play, once again tells us what it means to be a man, where to find joy and how to deal with the loss.

– My heart is full that the Ohrid audience has greatly “received” the play. The space is also phenomenal. It’s very different to play on this stage, compared to the theater classical scene. Different sounds are heard everywhere, and that’s what gives you extra motivation to play and give more. This is my first collaboration with the director and it is a nice experience for me. We went through a self-exploration process. In the play there are several musical elements, part of the famous songs of the band “Blondie”, which is quite authentic. The role I am interpreting, the fairy Titania is one strong woman, queen of the fairies, wife of Oberon, and because of all this, I considered the whole project and the role itself as a challenge, says Katerina Anevska, an actress from the Bitola National Theater.

Particularly for the actor Petar Spirovski is the feeling of acting on the scenic spaces of the Ohrid Summer Festival.

– “Ohrid Summer” is always displayed in the best light, as well as we, the Bitola National Theater, and therefore we always have successful cooperation. Especially is the feeling to play in this region, Dolni Saraj, the church “St. Sophia”, the Antique Theater and the like. This is my third project with John Blondell, the director of this play. The challenge to work Shakespeare is really huge, especially the role that I have Zevzek or in other translations Jester. It was always a challenge for me to play precisely this role and I enjoyed it. This is in some way fulfilling part of my dreams, says actor Spirovski.

And for this drama project at the festival “Ohrid Summer”, as well as for the mega-spectacle “Vivaldi” that was held on Thursday at the Antique Theater, more tickets were requested.