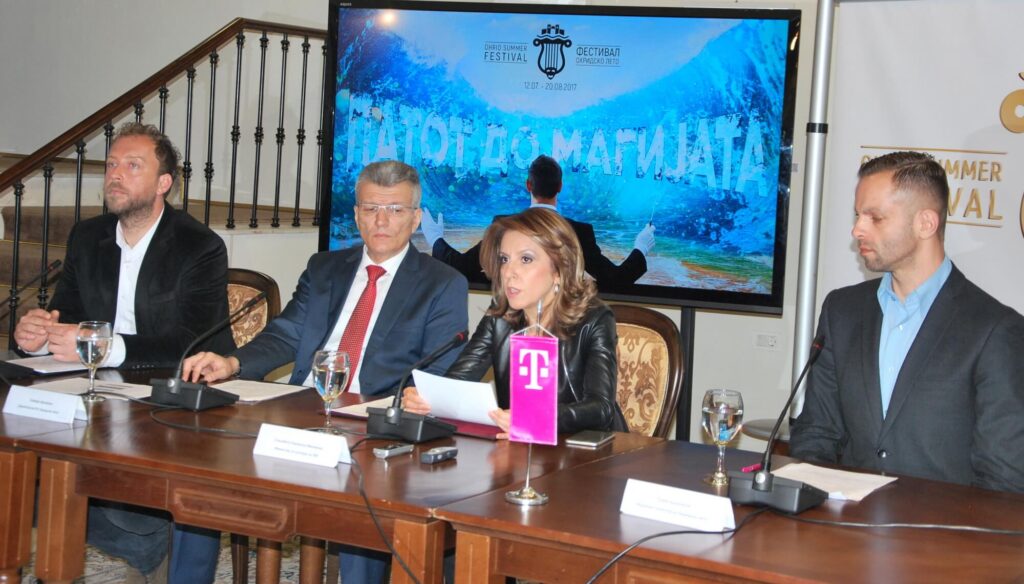 For the first time the program will offer a record number of 38 music events in whose performing  will participate more than 270 artists, said Mr. Cuckovski who is  selected for a new selector for the music programme …

The musical spectacle of jazz quartet “Fourplay” will open this  57th  festival edition of the most renowned cultural event in Macedonia – “Ohrid Summer Festival”  which will be held under the motto “The road to magic”  and with a new logo.

The Minister of culture Elizabeta Kancheska Milevska at today’s press conference pointed out that the “Ohrid Summer Festival ” through the  nearly six decades of its existence has grown into a unique brand of Macedonia, a manifestation that strongly promoted and affirmed our country in the international context and was building our relations with the world.

– In the last 10 years with the expressed support of the Ministry of Culture within the framework of the “Ohrid Summer Festival” have been realized  more than  500 cultural events, among which with special attention  I will single out the performances of the grandioses Elina Garancha, Dmitri Hvorostovsky, Leo Nucci, Jesse Norman, Ennio Morricone … as well as the  exceptional performances of  cult theaters such as “Vera Komissarzhevskaya” from St. Petersburg, Slovenian National theater, National theater of Turkey, “Sfumato” theater from  Bulgaria, “Habima” theater from  Israel and many others.

No less important is that  at the “Ohrid Summer Festival” have been also presented themselves  a great number of  the Macedonian renowned artists and ensembles, said  Kanceska Milevska.

She noted that the Republic of Macedonia and our cultural capital, the city of Ohrid this year will host over 300 renowned artists, performers and authors from 20 countries from the whole world, from China, Indonesia, USA, Netherlands, Italy, Russian Federation, Austria, Canada, Poland and other countries and is pleased to announced the music spectacle of  the Jazz quartet “Forplay”, which in its interpretation includes elements of R & B and pop music, and  with which the festival will be opened.

– The Quartet which in recent years delights the world public with its researches in discovering of the limitless dimensions and permutations of jazz music, at  the Antique Theater will perform together with the  Macedonian Philharmonic orchestra under the baton of  the conductor Emin  Djian.

I am convinced that on July 12 at the Antique Theater  we will be witnesses of an extraordinary artistic experience that will  capture  the attention of  music experts and Macedonian audience, said the Minister of Culture.

The general manager of the festival Mr. Oliver Arsovski pointed out that this year they have prepared an attractive, high-quality and exciting program with more than  50 events – music, drama and ballet performances,  but  also some  innovations that will try to retain the epithet of highly reputable european festival.

He also presented the new logo of the festival which consists of four elements – Samuel’s Fortress, the mask, the waves and the harp made by the artist Tome Kolev  from the agency “Ovation Advertizing” as an attempt  for  modernization of  the festival.

– From this year with the professionalism and skill of the new  program selectors we put a new life into the program and I am convinced that it will be recognized by  the professional critics and our loyal audience, emphasized   Mr.Arsovski.

He thanked  to the Ministry of Culture, which helped to reconstruction of  festival scenes in Dolni Saraj, the Antique Theater and the vestibule of St. Sophia, which means that Ohrid  as  a City of Culture will offer a complete experience for the audience and  renowned  artists.

The new selector of the drama program of Ohrid Summer festival Mr.Zoran Ljutkov noted that this year they will offer four performances of domestic theatres, and three of them will be Premieres  and four theater plays from the international scene, where the accent will be put on three premieres of Macedonian theaters.

From the visitor theaters we will see performance of the Chamber Theater 55 from Sarajevo with the play “Frogs” (July 15-th) is a story about people and  time  in which  we live,  “Othello” produced by Theater of the Bulgarian Army in Sofia,  as well as  the Concert show “Magic  National” directed by Jon Karamitru,  produced by the National Theater in Romania.

The audience will also  have the opportunity to see the play “The Drunks” by Ivan Viripajev, one of the most staged contemporary Russian and European writers,  directed by Boris Lijeshevic, which stands out among the most current Balkan directors,  in production by the theater  Atelier 212.

The music part of the program was selected by Mr.  Gjorgji Cuckovski , who pointed out that the festival will keep classical music as the main characteristic of the festivcal,  but it will also offer enrichment genre, worldwide mega performances and ensembles that  will be premiere  guests in the Balkans.  Besides the jazz spectacle of the opening of the festival, there are introduced also jazz evenings, then the guest tour of  the Rock Symphony with  Vlatko Stefanovski, as well as the ELK  Chamber Orchestra from  China.

– For the first time the program will offer a record number of 38 musical events in whose performance will feature more than 270 artists, said Cuckovski who was appointed  for  new  selector of the music program.

Otherwise the  program of Ohrid Summer Festival this year is announced three months before the beginning of festival, and  It is as pointed out the General manager Mr.Arosvki part of his commitments to greater domestic and international promotion, so that  the potential  tourists and guests from Europe and the region who will visit Ohrid to be  informed on time with the program content and to be able to see the  interesting events.

According to the festival organizers, this year is also planned an  off-program with concerts and art exhibitions which will be additionally announced.

PrevПретходноGjorgi Cuckovski: I have not feeling that I work, but that I live the dream of my life.
СледноIn sales online tickets for Ohrid Summer FestivalNext