A thunderous applause and three “basses” for the pianist Sinchuk 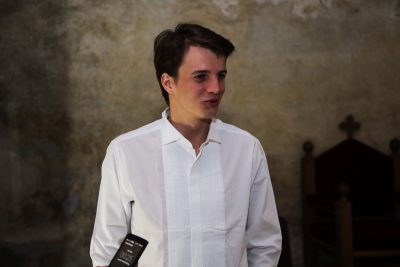 The concert of the Russian pianist Alexander Sinchuk in the framework of the Ohrid Summer Festival was held with a strong applause and satisfied audience.

In the audience there were listeners from all generations who three times brought back the young and talented Russian pianist back to the stage with the works of Tchaikovsky and Rachmaninoff.

– I play for the first time at “Ohrid Summer”, but I have listened to this world-renowned festival. That’s why I am experiencing my performance tonight as a great honor, and also great pleasure. As for my performance I expect a high level and great success, and I hope that the audience will greatly accept me, said before the start of the concert Sinchuk.

His career begins to go uphill after his victory at the fourth international competition “Sergei Rachmaninoff” in 2008 in Moscow, after which the 19-year-old pianist performs at the solo recital at Carnegie Hall in New York.

Sinchuk graduated and received a master’s degree in the class of Valeriy Piasetsky at the Moscow Conservatory, and in 2014 he obtained a diploma from the music school “Thornton” in Los Angeles, where he studied in the class of the American pianist and the first winner of the Tchaikovsky Competition, professor Daniel Polak. He is perfected by prominent pianists Naum Starkman, Rudolf Buchbinder and Dmitry Bashkirov. In 2015, Has been appointed to the Moscow State Conservatory.

He is a laureate of many important national and international competitions including the first prize and gold medal at the Vladimir Horowitz Competition in Kiev and the Grand Prix at the Interlaken Competition in Bern.

In 2009, Alexander Sinchuk released the CD “Romances by Sergei Rachmaninoff” alongside the baritone Pavel Baranski, and also a solo CD in the Great Hall of the Moscow Conservatory with works by Russian masters Tchaikovsky, Skryabin and Rachmaninoff.

PrevПретходноZbogar: I am honored and pleased that the EU is a partner with the “Ohrid Summer”
СледноThe Ohrid Summer Festival is decorated with another recognitionNext