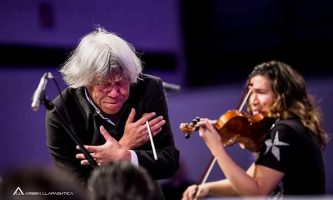 The Indonesian-German duo, Iskander Vijaya on violin and Norman Vijaya on piano, will hold a concert of “Ohrid Summer” tonight, closing the musical part of the program on the 57th edition of the festival.

The program includes works by U. Vijayah, Li Zili, C. Cui, F. Say and J. Masse. A guest of the percussion will be Aykut Kosellery.

The concert will take place at the church “St. Sophia” starting at 22:00.

Iskandar Vijaya was born in Berlin, begins to teach violin at age four, and graduated violin at the University of Berlin in 2010. He works with some of the most famous conductors and musicians of today such as Zubin Mehta, Christoph Eschenbach, Rolando Vilazon, Fazil Say and others, performing with prestigious orchestras including: orchestras in Berlin, Munich Philharmonic Orchestra, Tonhale Orchestra in Zurich, Warsaw Philharmonic Orchestra, Radio-Symphony Orchestra in Vienna, as well as the orchestras in Frankfurt, Valencia, Oslo, Basel, Hong Kong, Jakarta and others. The performances are held on five continents in the concert halls including: “Concerthouse” in Berlin, “Tonhale” in Zurich, Philharmonic in Luxembourg, opera in Tel Aviv and many others. In 2013, Iskandar takes part in the opening of the APEC Summit, and is the representative of Indonesia at the World Expo Expo in Milan in 2015.

His debut CD “Bach and Blues” was promoted in 2011 and is well received with expert reviews. The second recorded edition with Bach’s music was realized with the Berlin Camera in 2014, and the third CD “Tango Fuego” reached the top of the classic top charts in Germany.