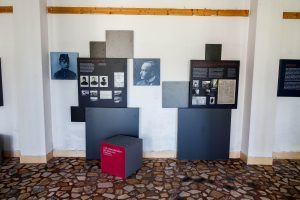 “Robert Musil and the First World War” is the theme of the exhibition that was opened today within the Ohrid Summer Festival.

As the Ambassador of the Culture of the Republic of Macedonia in Austria, Elena Misirkova, Musil, one of the most significant and also the least-known 20th-century writer of the German-speaking field, noted.

– For Austrian Robert Musil it can be said that he is one of the most important authors of the German-speaking world, which is also the least known when we are talking about the 20th century. In August 1914, he took up his military duty in Upper Austria, where he spent his childhood and is a participant in World War I, Misirkova stressed.

The exhibition was originally produced by the Munich Literary House, and the curators were Reinhard Wittmann and Karolina Kin. It was then adapted from Adalbert Stifter House, and curator was Alexander Veran, and in this form was presented in Linz 2015/2016.

The exhibition “Robert Musil and the First World War” for the Macedonian public has been translated into Macedonian and enlarged with a general portrait of Robert Musil. After the festival “Ohrid Summer”, the exhibition will be moved to Stip.