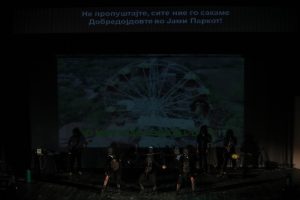 The documentary about the oldest nation in the world, “Yami District” was played for the 19th time, but for the first time within the frames of the festival “Ohrid Summer”.

In its form, the play is fragmented and postmodern, and the great addition to it is the video add-on, which complements the sense of a true documentary. Famous politicians, false editions of a national diary and other shows can be seen in the video. The play was played by: Isidora Simijinovic, Nina Neskovic and Jelena Graovac, along with them is the music group “Vrum”, and the performance is based on the text of Milena Bogovac and directed by Kokan Mladenovic.

– I did not have some expectations from the audience. Here you have an exchange of emotions, and I am satisfied. Today, for the first time in Ohrid, I hope that we will have time to get to know the city better. Today we are playing the 19th time this play on the territory of the former Yugoslavia. We were preparing the play quite intensely, because the whole play was fast, we did it as we felt it. We are on the stage for an hour and thirty minutes, it takes a lot of energy and adrenaline, says actress Jelena Graovac.

According to the author and producer of the music, Marko Grubic, in four months, this is the 19th performance of the play, and after the Ohrid Summer “, he says, a summer break and a new game on the stage from September.

– In Ohrid I am for the first time, but last year we performed with the same author’s team of the MOT in Skopje and I hope that next year we will perform something new at the Ohrid Summer Festival. Preparation for this performance was quite long, we have already checked the team, it is not our first work, but we needed time to develop this thesis, “Grubic said.

The well-packed theater play “Yami District – The Oldest Nation in the World” was followed by a huge crowd who rewarded the actors with stormy applause.