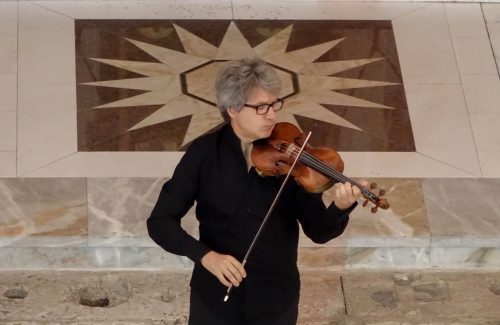 A wonderful concert night in Saint Sophia hosted the Italian violinist Francesco Dorazio last night for fans of classical music who had a rare opportunity to enjoy the sounds of selected solo scores of Bach, Berio, Isai, Chesa, Dal Ongaro.

Doracio plays the Guarneri violin named “The Count of Cabriac” made in 1811 in Cremona, as well as a valuable instrument made by French master Jean Baptiste Wyoming in 1863.

Francesco Dorazio was born in Bari where he begins to learn a violin with his father. Later he studied at the Mozarteum Academy in Salzburg, under the mentorship of Today Zigmondi and the Rubin Academy in Tel Aviv, in the class of Jair Kles. As a soloist he performs in Europe, USA, South America, Australia, China and Japan. Recorded for record companies Deca, Hyperion, Opus 111 / Naive, Stradivari and Amadeus.

The performances are carried by Francesco Dorazio on the scenes of some of the world’s most prestigious concert halls and audiences, such as the Milan “Scala”, the Berlin Philharmonic Hall, the Santa Cecilia Academy, London’s Royal Albert Hall and Cadogan Hall, the Baroque Music Center In Versailles, as well as at the festivals in Buenos Aires, Istanbul, Mito in Turin, Montpellier, the festivals in Ravenna, Ravello, Urbino, Salzburg, Strasbourg, Stresa, Tanglewood and the Venice Biennale.

The repertoire of Dorazzo is enormous and includes works by the baroque repertoire performed with the ensemble for baroque music “Astre” from Turin, to works of romantic and contemporary music literature. His special affinity for contemporary music is recognized by many composers, so he premiered works by some of the most important composers of today, including Bret Dean, Terry Reilly, Ivan Fedele, Michael Nieman, Michel gave Ongaro and many others. For many years he has been collaborating with Luciano Berrio whose works are often performed premiere and are part of his permanent repertoire.