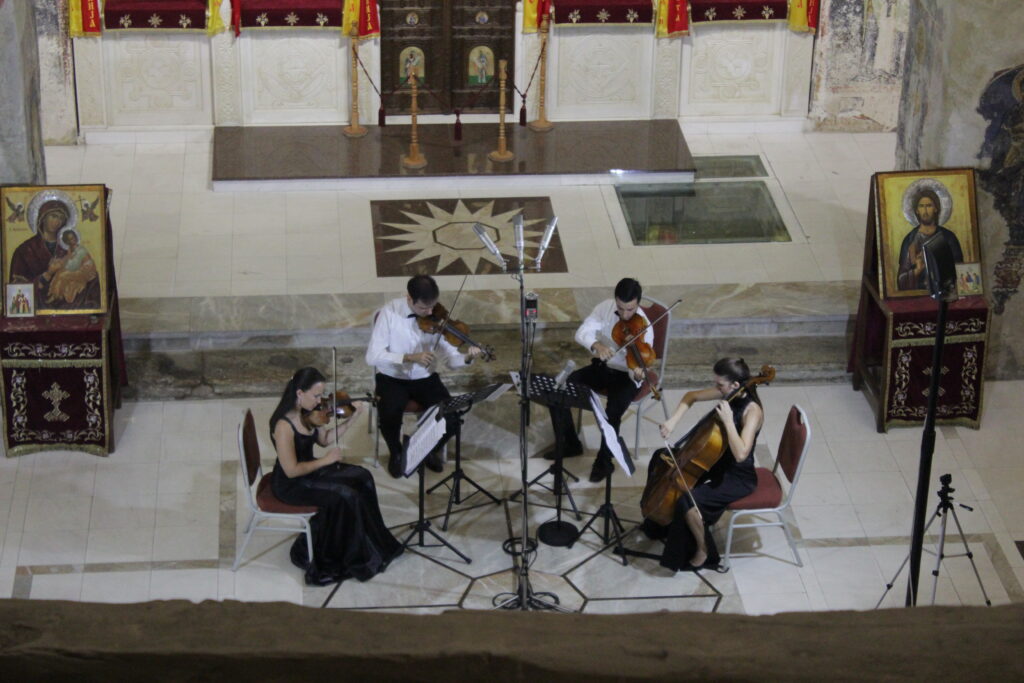 The power of the string instruments last night touched the delightful listener auditorium that filled the church “St. Sophia” through the impressive interpretation of the Philharmonic quartet.

The Philharmonic quartet, within the program of the festival “Ohrid Summer” performed the most famous quartets of Russian composers Tchaikovsky and Shostakovich, and the beauty of musicians echoed in the filled cathedral. Satisfied with the concert were the artists, but also the audience.

We spent a great time. The very ambience of the church and the festival itself gives such a feeling. We were really inspired and pleased to play. There were magical moments on the stage, which is impossible to experience in a rehearsal. I think we made a beautiful evening. Tchaikovsky and Shostakovich with their directions are different and beautiful, says Ana Kondratenko, the first violin in the Philharmonic Quartet. Although they were concentrated in music, however, as Kondratenko says, the pleasant atmosphere and excitement among the audience were felt by the artists themselves during the performance of the wonderful works.

– There was  a very nice atmosphere. We felt the audience’s excitement. The repertoire was the most famous quartet of Russian composers. Tchaikovsky number 1 with a very famous second part and Shostakovich number no. 8, opus 110, adds the extraordinary violinist.

Shostakovich’s work does not end up so bombastic and euphoric, however, the already established fluid with the audience and the positive vibrations carried by the artists were a great occasion for a stormy ovation and a return to bis, after which the quartet Philharmonia, in the whole Russian program, squeezing the composition “Ne si go prodavaj Koljo cifligot”.

– We have long wanted to form such a quartet, but we did not have conditions for it. Finally, we found a place, the chamber hall of the Macedonian Philharmonic in the new building, with beautiful acoustics designed precisely for these compositions. Until then, in Skopje we did not have an acoustic scene where to present ourselves, except in the church “St. Sophia” in Ohrid, says Kondratenko.

Apart from the first violin, Ana Kondratenko,this quartet is also composed of violinist Bojan Ilkoski, cellist Marija Mihajlovska, and Bojan Talevski who plays Viola. These young, but extremely talented artists in a few months of existence as a string quartet collaborated with famous conductors and prominent chamber artists.

PrevПретходноConcert for piano four hands tonight at “Ohrid Summer”
СледноGaceva: It’s not easy to include among the artists of “Ohrid Summer”Next