Baroque works and music from Weil tonight at the “Ohrid Summer” 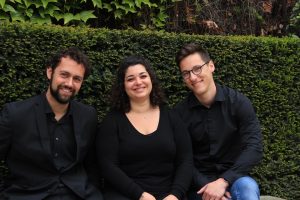 Ensemble “Maskerina” from France will start at 8 pm and 30 minutes. It will be played by Sebastian Beretta on the baroque flute, Marie Guillaume on viola da gamba and Nicolas Watin at the teorbo.

Maskerina was founded by violinist Guillaume and laureate Nicolas Watin last year during their studies at Versailles. The ensemble unites musicians whose main interest is baroque music. As a duet or a larger ensemble, Maskerina is dedicated to music research on the repertoire of European baroque music from the 17th and 18th centuries, with a special emphasis on the authentic interpretation of original instruments and interaction with the audience.

Past concerts are taking place in Paris, Versailles, Marseille, Bordeaux, Geneva …. And they also perform with other ensembles such as Raveus and Amici Me.

After the Maserina Concert, at 10 pm, Kabare “Speak quietly” will bring works by composer Kurt Weil.

Cabaret “Speak quietly” is made up of soprano Tijana Djuricic from Serbia, pianist Irina Naumovska from Macedonia and Serbian accordion player Aleksandar Budimir. The cabaret is designed to present all stages of the work of Kurt Weil, with a special emphasis on the works created before the departure from Germany, the works created during their stay in Paris and immediately after coming to America. Transparently thematic, stylish and harmonious, intertextual overlaps are noted on everything that Wail would call “life” for 60 minutes. Wile is one of the most important composers of music for a scene of the last century. He was born in Germany, but spent most of his life in the United States. His authorial opus includes numerous musicals, operas, operettas, cabarets, especially those who collaborate with Bertolt Brecht. Wile had full control over the dramatic structure of his works and thus increased the strength and social significance of the music he composed. The open questions of the ideologies, politics and the power of music seem to be obsessed with daily. The composer never forgot his roots and, unlike many other immigrants who fought to conceal Jewish origins, he was one of the first to pay attention to the Holocaust and the necessity of raising public awareness of the suffering of European Jews.

Soprano Djuricic was born in 1983 in Belgrade. A certain period of study solo singing with Nikola Kitanovski in Belgrade, and graduated from FILUM in Kragujevac in the class of prof. Radmila Bakocevic. Experiments on the field of sound and theoretically examines the body-space-voice relationship. Concert intensively (it has more than 150 solo and joint concerts) in Serbia and the region, Italy, France, Germany and Japan. Djuricic presents Serbian contemporary music premiering works by young authors in 2013 in Tokyo and Nagoya. In a joint project with pianist Andrija Pavlovic, Serbia marks the Prague Quadricycle in June 2015. The discography opens with a recording of the works by Djuro Zivkovic “I will contemplate” for soprano and chamber orchestra in 2011. She is a member of the Association of Music Artists of Serbia and a professor at the New Academy in Belgrade and at the Faculty of Technical Sciences in Novi Sad.

Irina Naumovska was born in Skopje (1983). He completed his lower and secondary music education in Skopje, and graduated, received his Masters and PhD with the highest grades of FMU in Belgrade in the class of prof. Jokut Mihailovic. During her studies, she collaborated with artists: Wardi, Nakamura, Barof, Viardo, Starkman, Flores, Nersesian and Valdma. She performed at concerts and competitions in France, Malaysia, America, Japan, Italy, Greece, Bulgaria, Switzerland, Sweden, Russia, Austria, Portugal, Spain, Czech Republic, Germany, Morocco, Serbia and others. She is the winner of 7 international awards (Morocco, France, Italy, Serbia, Bulgaria) and 7 first prizes at state competitions in Macedonia. Participates in festivals in Italy, Portugal, Austria, Germany, Japan, Macedonia (“Ohrid Summer” and “Skopje Summer”). She performed with the Macedonian Philharmonic, the Swiss Symphony Orchestra “Camerata Swiss” and the Austrian Symphony Orchestra. She has performed audio and video recordings in Malaysia, Morocco, Macedonia, Switzerland, Austria, Japan and Serbia. In 2014, Naumovska is a member of the International Jury of the “Ohrid Pearls” competition. She received the awards “Klimentina Rafajlovska” and the award of the city of Skopje “13 November”. She is a member of the International Piano-Duo Organization in Tokyo.

Aleksandar Budimir (Belgrade, 1989) made the first musical steps in the class of prof. Ljubinka Barbaric, and during the academic studies he studied in the class of prof. Radomir Tomic, Dean of the Kragujevac Music Academy. Graduated as a concert performer-accordionist in the class of prof. Zoran Rakic, Ph.D., with whom he obtained a master’s degree in 2015 at the Academy of the University of East Sarajevo. He attended seminars of world professors, among which are the cooperation with Vladimir Beshmamilnov (Russia) and Warin Vasovic (Serbia). He continues his education in the field of ethno-jazz genre with prof. Dragan Vasovic. He has won many awards at festivals and competitions in the region and beyond. As a teacher, he started working as a harmonica professor at the Vatroslav Lisinski Music School in Belgrade in 2013, and since 2009 he has been performing regularly with Tijana Djuricic, a soprano, who formed the ensemble “AMOS”.