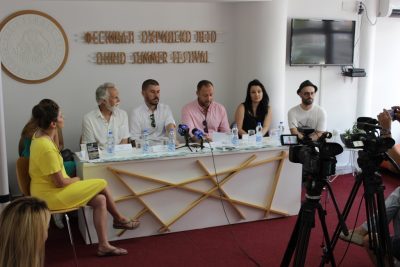 The National Theater from Bitola tonight at the Ohrid Summer Festival will premiere the theater play “Dream of the Summer Night” by William Shakespeare, directed by John Blondel.
As the playwright of “Ohrid Summer”, Zoran Ljutkov, explained, this performance is one of the two premieres planned for this year’s festival edition.

-This is a play that captures the character of Shakespeare’s and once again teaches us what it means to be a man, where to find joy and how to deal with the loss. This is not the first collaboration of the American director with the National Theater from Bitola, they have a lot of successful projects and long-term cooperation behind them. My already proven counterparts from the National Theater in Bitola play Petr Gorko, Ilina Chorevska, Nikola Projcevski, Marjan Gjorgjievski, Viktorija Stepanovska-Jankulovska, Maja Andonovska-Ilijevski, Slobodan Stepanovski, Aleksandar Stefanovski, Ognen Drangovski, Katerina Anevska, Petar Spirovski, Sonja Mihajlova, Julijana Mircevska, Valentina Gramosli, Menka Bojadzieva, Juliana Stefanovska, Elena Moshe. The playwright of the play is Biljana Krajcevska, and the costumes that we will look at tonight are the work of Blagoj Micevski, scenes Valentin Svetozarev is a fragment, while Aleksandar Dimovski is responsible for the music, said Ljutkov at today’s press conference.

Director of the National Theater from Bitola Ivan Jercic stressed that this theater has been present for many years on the festival “Ohrid Summer” with its premiers, and the director John Blondel is their great collaborator and friend.

– “Summer Night’s Dream” is our third premiere for this year funded by the Ministry of Culture of the Republic of Macedonia. We have another premiere by the end of the year with financial support from the line ministry, and we have made three or four performances with our own funds, so I think that we will round off 2017 as a very fruitful year with eight prime ministers, said Jercic.

Director of the theater performance “Dream of the Summer Night” John Blondel said that it is a great honor to return to the festival “Ohrid Summer” and that many capable actors participate in this project. The text of Shakespeare, in his opinion, is special in itself , Talk about what love is, when we find it, we lose it, we find it again, what happens to us in the whole process of personal change.

– I’m a student of the great English director Peter Brook. So when we sat down with the actors to conceive the play, I said that I had no concept at all, and I still do not have it. The concept is what emerged from our work, a kind of creation of solutions. I am always trying to make a connection between the people, the individuals, the individual, the human in it with the text, in order to avoid the trap of imposing, personal pretentiousness, influence, said Blondel.
The actor Petar Spirovski, who plays the role of Zevzek, says he had the desire to play this character on the stage since the student days.

– I can say that this is my third project with Blondel so that we already cooperate as friends. The whole process has passed with a huge ease. As actors, we always outlined several roles that we would like to play in life, and here, this is one of the roles I have outlined since student years when we worked on Shakespeare, said Spirovski.

The role of Titania in the play is played by actress Katerina Anevska according to which, cooperation with director Blondel is a huge experience.

– This is my first collaboration with the director John Blondell and I am particularly glad that I went through a process of self-discovery and faced many challenges. This is my favorite work from Shakespeare and it is definitely a source of motivation for many directors and artists from around the world. It was interesting that in the performance we also inserted a few songs from the famous band “Blondie” and it was a real challenge for me to join the entire music challenge with the image of Titania, which is a portrait of a powerful woman who is the queen of the fairies, said Anevska.

About the setting with director Blondel, the playwright of “Summer Night of Dreams” Biljana Krajeska said that it is a blend of two different cultures, how to insert them into the actor’s expression in view of the diversity in thinking, humor.

– The act opens many life issues and problems, from power to love. In the end, we have reached our common story which speaks of what it means to get something when you lose something when people get a voice, love, power … Here’s a part of our personal stories that we will present in a two-hour game, said Trajchevska.

Shakespeare’s Drama “Dream of the Summer Night”, translated by Dragi Mihajlovski, will be played on the stage Dolni Saraj starting at 9 pm.